Despite the travails commuters go through daily on their way to work, school or other destinations, presidential spokesperson Salvador Panelo believes that Metro Manila has not yet reached the point of a “mass transport crisis.”

His reason: Commuters are still able to reach their destinations anyway.

Panelo may have to win over to his side Phoebe Lois Baula of Cainta, Rizal province, who now has to spend close to four hours on the road to get to her classes at a university in Manila after the Light Rail Transit (LRT) 2 shut down operations on Oct. 3 when two of its transformers caught fire.

Before the fire, her commute to school took only just over an hour.

Panelo will also have to convince Stephanie, who lives in Quezon City, to buy into his assessment of the quality of transportation in the metropolis.

At noon on Tuesday, she spent more than 40 minutes on a jeepney to get to Cubao from Anonas Street through Aurora Boulevard, a trip that took just 10 minutes when the LRT 2 was still fully operational.

The fire that hit the LRT 2 line has temporarily shut down operations at the Santolan, Katipunan and Anonas stations.

Panelo, however, said the Light Rail Transit Authority (LRTA) should still “improve on its services.”

“What do they mean by transportation crisis? I only see the traffic. That’s not transport. There’s transportation available. We can all get rides,” he said at a press briefing on Tuesday.

He added: “I don’t think we’re at that point yet. Because people can still reach their destination.” 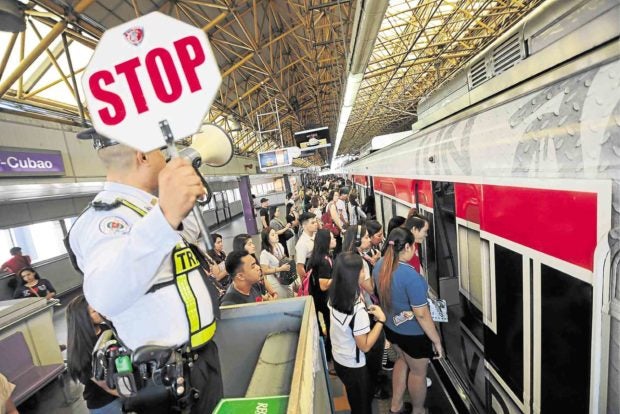 But the Asian Development Bank (ADB) has noted that public transportation is not possible in a substantial portion of random trips in Metro Manila.

With its residents’ transport woes, Metro Manila has become the “most congested city in developing Asia,” according to the ADB.

Panelo advised commuters having difficulty getting rides to just wake up and leave earlier in order to get to their destinations.

“There’s a solution to that. If you want to go, arrive early in your destination, then you go there earlier,” he said.

That’s exactly what Roy, who lives in General Mariano Alvarez in Cavite province, is doing.

Before one northbound lane of the South Luzon Expressway (SLEx) just after the Alabang viaduct was closed on Sept. 24 to give way to the extension of Skyway in Muntinlupa, Roy would wake up at 4 a.m.

Now he wakes up at 3 a.m. so he could get to his office in Makati on time.

Roy spent four hours on his commute on Sept. 26 because of the carmageddon on SLEx that backed up vehicular traffic from Alabang to the Eton exit in Santa Rosa, Laguna province. Normally, his trip to the office takes just one and a half hours.

Heavy vehicular congestion in other thoroughfares in Metro Manila like Edsa has become the new normal.

Panelo made the remarks following the criticism of a Bagong Alyansang Makabayan (Bayan) leader that there was a mass transport crisis in Metro Manila amid the breakdown of train lines.

On Tuesday, Bayan secretary general Renato Reyes said the presidential spokesperson “obviously knows nothing” of the daily ordeals of the average commuter.

“Sure, you can arrive at your work, but you’re already in tatters,” Reyes said in a statement.

Some netizens affected by the LRT 2’s partial operations took to social media to complain that their travel time now took as much as six to seven hours.

Panelo said commuters should not take this sitting down and that the LRTA should act to deal with the problems.

He noted a “big improvement” in Metro Manila’s mass transport system, given that breakdowns were no longer occurring daily but only “once a week.”

This does not mean, however, that the LRTA cannot do better, he said.

The party list group Bayan Muna said the public must be wary of the government ploy to use the transport crisis to push for the grant of emergency powers to President Duterte.