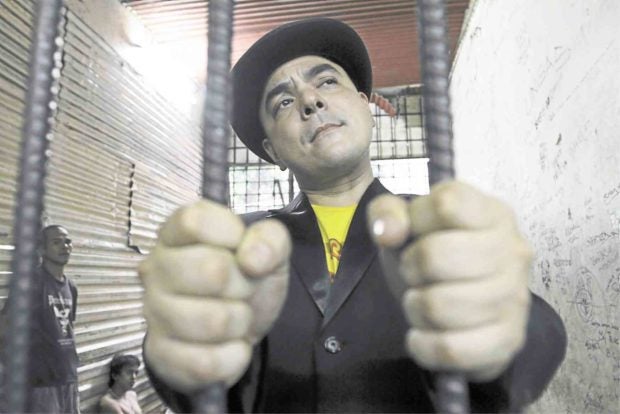 MANILA, Philippines — Controversial performance artist and activist Carlos Celdran had just kicked off his “Jose Rizal Tour of Madrid” when he died on Tuesday in Spain. He was 46.

Celdran had described the tour on his website as a visit to the places the Filipino hero had strolled, dined, congregated with other Filipino artists and intellectuals to discuss the reforms of their beloved Las Filipinas.

His death was confirmed by his wife, Tesa, who posted on her Facebook page at 2 p.m. on Tuesday a snapshot of a young Celdran with the caption: “In loving memory of Carlos P. Celdran, 1972-2019. As the family is making arrangements to bring him home, no details can be announced yet. Only that he passed from natural causes.”

Friends of Celdran in online chat groups said he died of heart attack in his sleep. Another friend said he had lately been concerned of “his high blood pressure,” which he dealt with by “adjusting his diet.”

Early this year, Celdran migrated to Spain and had been living in Madrid to practice his art, which included the walking tours that gained popularity among tourists in Intramuros, Manila.

On his Facebook page, Celdran explained his leaving his native land: “I have left the Philippines for good. There are many reasons why I left my beloved Intramuros, but it is mostly due to an aggressive political climate and the personal risks upon my basic right to freedom of speech and expression.”

It was a reference to a court case that was brought against him, which resulted from an incident on Sept. 29, 2010, when he, dressed as Jose Rizal, held a placard written with the infamous Noli Me Tangere character’s name “Damaso.”

He raised the placard over his head in front of the altar at the Manila Cathedral while the Catholic Bishops’ Conference of the Philippines was holding an ecumenical meeting.

He apologized, but in 2012 he was arrested, charged and convicted by a Manila court for “offending religious beliefs,” a violation of Article 133 of the Revised Penal Code.

In 2015, the Court of Appeals (CA) upheld Celdran’s 2012 conviction. In March 2018, the Supreme Court upheld the CA’s affirmation of his conviction.

He faced imprisonment of “one year, one month and 11 days” but he appealed the decision.

A graduate of the Rhode Island School of Design in New York (major in painting, 1996), Celdran was synonymous with “If These Walls Could Talk”—a walking tour of Intramuros that combined historical narratives and anecdotes, video art, and theater that highlighted Manila’s history from the 14th century to World War II.

His website said: “At 17 years, it is easily the longest running one-man show in Manila. The tour was said to have been recommended by the international social travel website TripAdvisor as ‘one of the top three things to do in Manila.’”

The tour, which included other destinations like Binondo, had been praised for being “part Vegas sideshow and part Britney Spears … an updated version of history with a dash of irreverent humor and savvy politics.”

Despite his comfortable circumstances, Celdran was grounded on the realities faced by urban poor communities.

A passionate advocate of reproductive health (RH), he once saw a teenage mother trailing her children, most of them toddlers. He stopped to chat with her and learned that she wanted to get herself ligated but didn’t have the money for it.

At the time, the free contraceptive services offered by government health centers had stopped.

“How much would it cost?” Celdran asked. About P500, she said. Celdran whipped out a P500 bill and made the woman promise she would use it as intended.

Weeks later, during one of his walking tours, he chanced upon her again and asked for an update. Sheepishly, she said she instead used the money for a child’s medication.

That encounter firmed up Celdran’s belief that unless RH services were given free, contraceptives would always be a last priority among the poor.

But his less-than-enamored views about the Catholic Church could be polarizing.

A balikbayan who had booked an Intramuros walking tour said she could barely contain her disgust at his asides about lecherous “prayles” (friars) and modern Padre Damasos that he inserted into his spiels about the history of the area.

“Can’t he be more objective and leave his audience to draw their own conclusions about the Church?” the balikbayan told her friends later. —With reports from Pennie dela Cruz and Inquirer Research