Vico Sotto on being mayor: ‘Most challenging 100 days of my life’

MANILA, Philippines — “This has been the most challenging 100 days of my life,” Pasig City Mayor Vico Sotto said on Tuesday in his first State of the City Address on Tuesday, on the 100th day since he took his oath of office as the youngest chief executive of a local government in Metro Manila.

Sotto, wearing a white shirt printed with “Pasig: Umaagos ang Pagasa” (Pasig: Hope is Flowing), laid out before Pasigueños gathered at Plaza Bonifacio the accomplishments of the city government under his leadership.

Sotto detailed his goal of making the Pasig, the eighth biggest city in the country, the first implementor of the Universal Healthcare Law.

He noted that the city had allotted P36 million in 2019 to allow more Pasigueños to be covered by PhilHealth.

This includes senior citizens, persons with disabilities, and tricycle drivers and operators.

According to him, the city budget for medical supplies for 2020 is three times larger than in 2019.

He said public hospitals in the city should focus more on service delivery rather than income generation.

“With the help of the council, we will amend the Revenue Code to make medical services affordable, if not free, for Pasig residents,” he said in Filipino. 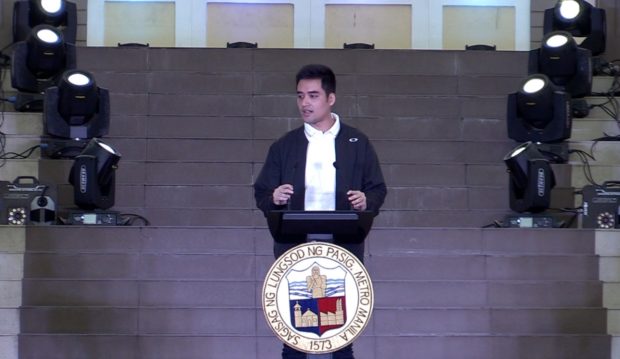 Among his “Big Five Agenda” for the city, Sotto called the housing sector the most challenging.

He said he had signed a memorandum stopping the collection of the so-called “compounded monthly penalties” on delinquent payments of beneficiaries of the city’s housing projects.

He said he was hoping he could, with the help of the council, to make the penalty even lower.

“Here in Pasig, for the first time, our scholarship program is no longer named after a politician but after Pasigueños,” he said.

The city budget, he added, had been realigned to accommodate more scholars — now at a record-high of  13,000 scholars, which he hoped increase to 16,000 scholars in 2020.

Sotto mentioned the “notorious” traffic enforcers of the city, called “Blue Boys,” who would reportedly ask money from traffic violators.

He said traffic enforcers had been reshuffled and had been required to attend a professional development program to improve their services.

The young mayor also laid out other accomplishments — particularly in curbing corruption in government offices and ensuring ease of doing business.

“We enjoin the public to continue reporting cases of corruption. Like I said, and this is a stern warning to everyone: The corrupt will be dealt with accordingly,” he said.

Among those present during Sotto’s address were his mother, actress Coney Reyes, and Rep. Roman Romulo.

Sotto ended the Eusebio clan’s 27-year rule in Pasig when he defeated reelectionist Robert “Bobby” Eusebio by over 70,000 votes in the May 2019 midterm elections.