Global brands that backed down under China’s wrath 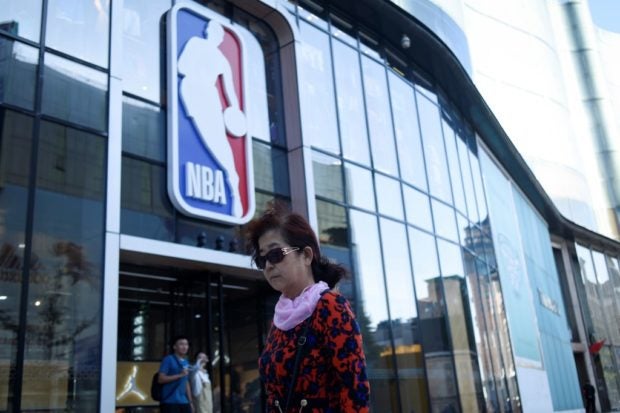 A woman walks past a NBA merchandise store in Beijing on October 8, 2019. – China on October 8 scrapped plans to air NBA exhibition games as the league faced an escalating punishment campaign in the lucrative Chinese market ignited by an American basketball executive’s pro-democracy tweet. (Photo by WANG Zhao / AFP)

The NBA is far from being the first foreign business to be benched by Beijing for touching a politically-sensitive subject.

From airlines to luxury brands, numerous companies have had to apologize or face boycotts for offending China’s views on semi-autonomous Hong Kong and self-ruled Taiwan.

The latest offender was the Houston Rockets after general manager Daryl Morey tweeted a message of support for pro-democracy protesters in Hong Kong.

Chinese state TV and sponsors dropped the Rockets and CCTV suspended plans to broadcast a pair of NBA pre-season exhibition games being staged in China.

Here are some of the recent high-profile cases:

Hong Kong flag carrier Cathay Pacific was heavily pressured in a campaign led by state-run media in August after Chinese authorities deemed the airline’s staff too vocal in their support of the protesters.

The airline’s then-chairman John Slosar initially insisted he “wouldn’t dream” of telling his staff what to think — but Chinese threats to blacklist the carrier forced a U-turn and Slosar stepped down last month.

In recent weeks staff has described deleting their social media accounts, fearful colleagues might inform on them while Cathay announced it had sacked several staff linked to the protests.

US jeweler Tiffany also came under pressure after a tweet showing Chinese model Sun Feifei covering her eye was interpreted as a sign of support for the Hong Kong protests.

Protesters in the city have adopted the pose to indicate police violence.

The picture of Sun — who was wearing a Tiffany ring on the hand covering her eye — was removed by the brand.

Under pressure from Beijing, a growing number of companies and international airlines — including Delta and American Airlines — have also edited their websites to refer to the self-ruling democratic island of Taiwan as “Taiwan, China” or “Chinese Taipei”.

Hotel chain Marriott’s website in China was also shut down by the authorities for a week in 2018 after a customer questionnaire listed Taiwan, Tibet and Hong Kong as separate countries, prompting the hotel chain to apologize and change the wording.

Versace, in its groveling apology, said the offending T-shirts were “destroyed” and Givenchy said the brand “resolutely upholds the One China Principle.”

This followed a major flareup in May 2018, when Chinese social media users targeted US clothing retailer Gap over a T-shirt showing a map of mainland China that omitted Taiwan.

According to the Boston Consulting Group, Chinese consumers snapped up 32 percent of all luxury goods sold worldwide in 2018, and the figure is expected to grow to 40 percent by 2024.

German camera maker Leica drew fire over an advertisement in April that broached the taboo subject of the 1989 Tiananmen protest crackdown, weeks before the 30th anniversary of the incident in early June.

The ad shows the struggles of a photographer to get in place for the famed “tank man” photo, showing an ordinary citizen facing down a line of Chinese army tanks, before the demonstrations were violently suppressed.

The company distanced itself from the advertisement saying it was not officially sanctioned by Leica.

Earlier in 2018, German automaker Mercedes-Benz apologized for “hurting the feelings” of people in China after its Instagram account quoted exiled Tibetan spiritual leader the Dalai Lama, who is seen as a separatist by Beijing.

The controversy arose in November after the firm posted clips on Instagram showing a woman eating pizza and spaghetti with chopsticks, which critics said was culturally insensitive.

It escalated when company co-founder Stefano Gabbana allegedly hurled insults at the country and its people.

The brand’s founders eventually apologized to customers but said Gabbana’s account had been hacked.

A search for Dolce & Gabbana products on major Chinese e-commerce sites such as Alibaba’s Tmall still turn up no results.