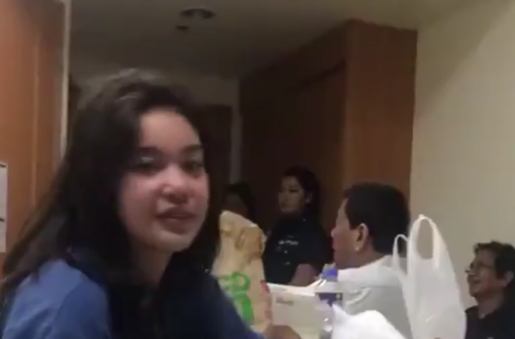 Go confirmed that Kitty had been admitted to the hospital for dengue but was now recovering.

“About Kitty, yes, she’s been (admitted for) dengue fever. She’s now in stable condition and in the recovery stage na,” Go said in a text message to the Inquirer.

Instagram user @n00bumi earlier posted a story on Instagram showing Kitty with her father President Duterte in the background, which had been captioned, “With Daddy Shark hahahahahahah,” the same video that the President’s daughter also shared in her account.

Another clip showed Kitty showing her dextrose tube while seated next to a friend.

After arriving here from Russia on Sunday and despite his complaints that he was not able to sleep during the 13-hour flight, the President had been reported to have gone directly to the hospital to see his daughter.

The video also showed the President still in the city on Monday evening./lzb