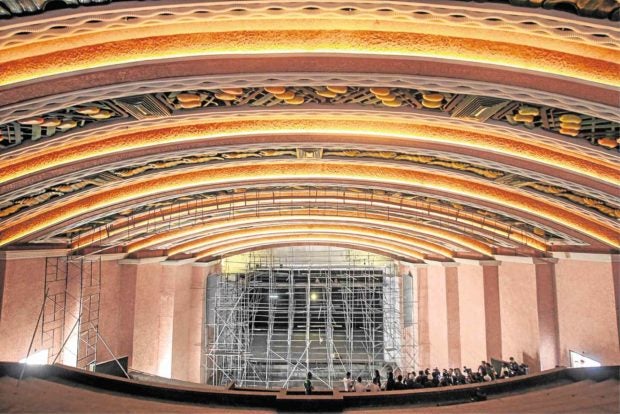 UNDER REHAB The “Grand Old Dame of Manila,” the Metropolitan Theater, is slowly being restored to its previous grandeur. —Earvin Perias

MANILA, Philippines — The first phase of the rehabilitation of the Manila Metropolitan Theater (MET)—a 1930s art deco structure that was a cultural center of prewar Manila—is expected to be completed by 2020, according to the National Historical Commission of the Philippines (NHCP).

During an ocular inspection of the MET on Monday, the NHCP chair Rene Escalante said that the target completion of the conservation and rehabilitation of the main theater was the first quarter of next year. Restoration of the theater’s two other wings, on the other hand, will take another year.

Cultural officials, including the National Commission for Culture and the Arts (NCCA) chair and National Artist for Literature Virgilio Almario, National Museum director Jeremy Barns and Manila Mayor Francisco “Isko Moreno” Domagoso were among those who joined the inspection.

The “resurrection” of the national cultural treasure was turned over to the NHCP this year. The effort to save the MET, said to be the biggest restoration project in the country, began in 2017 with a budget of over P260 million.

This was the third attempt to restore the theater to its original grandeur. The first was initiated by former First Lady Imelda Marcos and then by former President Gloria Macapagal-Arroyo. The building was designed by Juan Arellano, the architect behind the Manila Central Post Office.

Inaugurated on Dec. 10, 1931, the MET was neglected through the years. It was shut down in the 1990s due to mounting debts to the Government Service Insurance System.

Escalante said that the two other wings would house a ballroom, a museum, an office of the NCCA — the agency that owns the theater — aside from an artist’s workplace and a courtyard.

The multilevel theater has been painted with pastel colors with its ceiling decorated with carvings of banana leaves and fruits, including mangoes. Arellano had incorporated Filipino elements to the western art deco style.

“This theater once housed zarzuela performances, which is why we will open [the MET] with zarzuela,” Almario said.

He added that “komedya” would also be performed in the theater, just like during its heyday. Former TV show host German Moreno performed vaudeville on the same stage.

Students from Metro Manila would also be invited to the cultural shows, said Almario, so that they would learn to appreciate classic Filipino theater.