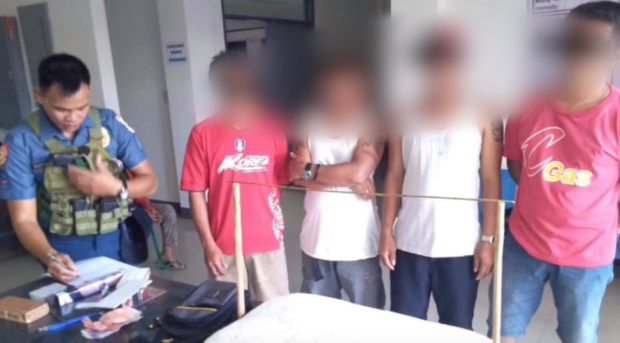 Arrested suspects caught in the mid of a spider derby in Valencia City, Bukidnon on Sunday. In front of them is the spider fighting ‘arena.’ CONTRIBUTED PHOTO

CAGAYAN DE ORO CITY—It wasn’t the spiders. It was the gambling.

Serenas said those arrested were not the top honchos of the illegal gambling scheme. Someone from Davao City had organized the derby but escaped during the raid.

The derby started a day before the police operation.

Police had received reports spider combat had replaced cockfights as a form of gambling in some areas because of the increasing costs of holding cockfights.

Serenas said police were alarmed at the presence of children in the spider derby.

“Gambling sets a bad example for children,” Serenas said. He said pitting spiders against each other was not illegal per se. Betting on this was, he added.

“If there is what we call ‘gateway drugs,’ there is also ‘gateway gambling vice.’,” Serenas said.

“These people encourages gambling among kids particularly those kids who are fond of spiders,” he added.

Police will use the seized spiders as evidence against those arrested. The insects will be released back into the wild after they had been presented in court.