The Sandiganbayan Sixth Division said the evidence presented by the prosecution was insufficient to convict Vitangcol and his co-accused Wilson De Vera, an incorporator of PH Trams.

Vitangcol was accused of violating Section 3 of Republic Act No. 3019 or the Anti Graft and Corrupt Practices Act for allegedly trying to extort money from Czech train manufacturer Inekon through De Vera.

Both allegedly demanded $30 million from Inekon Group chief executive officer and chairperson Josef Husek in exchange for a P3.7 billion contract to supply 48 coaches to MRT.

Vitangcol, who attended the promulgation of his case, said the decision has been long overdue stressing the prosecution had no solid proof that he tried to extort money.

“Ever since, from the very beginning, we have been saying that this is a harassment case and that there is no evidence for the court to convict me of any charge or any crime,” he told reporters.

“The court has spoken.  That’s the sum of it all, we know that we were just placed in difficult situations throughout these years,” he added. 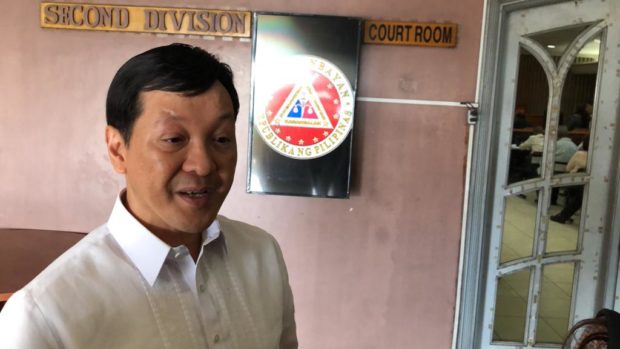 But the prosecution claimed that testimonies of Husek and then Czech Ambassador to the Philippines Josef Rychtar – whose residence in the country was the alleged meeting place of the accused and Husek – was enough to convict the respondents.

Vitangcol entered a not guilty plea to the charges in 2017, insisting that he was merely a fall guy.  He served as MRT general manager during the term of former President Benigno S. Aquino III.

The controversy eventually led to Vitangcol’s resignation from the post.

Last May, the anti-graft court allowed both accused to file their demurrers to evidence, saying that the defense did not mean to delay the legal proceedings.

With the Sandiganbayan Sixth Division’s ruling, the hold departure orders placed against Vitangcol and other co-accused in this case were also lifted and their bail bonds ordered released. /kga