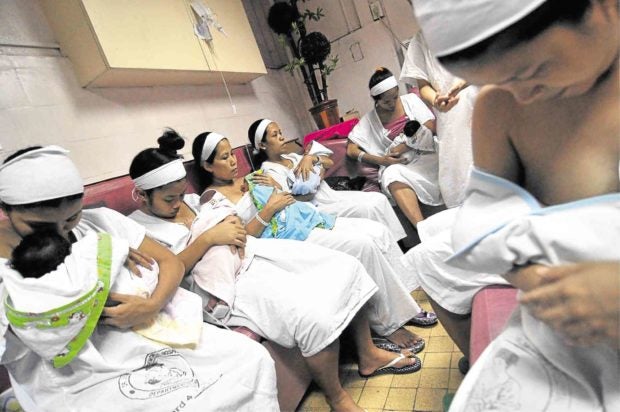 FEEDING TIME Mothers breastfeed their newborns at a ward in Jose Fabella Memorial Hospital in Manila. In Eastern Visayas, population officials are worried about the rising cases of teenage pregnancy, urging parents and school officials in the region to intervene and address the problem. —RICHARD REYES

TACLOBAN CITY, Leyte, Philippines — Jean was only 16 when she bore a child with her 17-year-old boyfriend in 2016. They were schoolmates in one of 247 public schools in Eastern Visayas where teenage pregnancy is common.

While she admitted that she was not yet ready to become a mother at her young age, she said she had no regrets.

“My baby [girl] is healthy and has brought us joy. My partner is turning out to be a responsible man,” Jean said, adding that he has a job that ensures that the family will not miss a meal and that their basic needs are met.

According to Elnora Pulma, regional director of the Commission on Population and Development (Popcom), the situation of teenagers engaging in premarital sex was alarming, considering that Eastern Visayas is one of the poorest regions in the country.

While the Popcom had yet to get the latest figures on teenage pregnancy in the region, the agency suspected that the number was increasing.

“This trend is not only in Eastern Visayas but nationwide. That is why it is now a national social emergency, which calls for a national action,” Pulma said.

She said the Popcom was bent on tackling this social problem by strengthening its programs.

Pulma encouraged parents to open communication with their teenage children about sex and reproductive health-related issues.

“We have to encourage our parents to discuss these sensitive issues with their children though sex remains to be a taboo [in the country],” she said.

Among the reasons for the rise in teenage pregnancy cases was the influence of social media where young people get access to pornographic materials and peer pressure, said Reyan Arinto, chief of the technical services unit of the Popcom in Eastern Visayas.

Arinto said the agency visited schools to discuss the issues using a module where teenagers were taught about fertility and life skills that could help them avoid having sex at an early age.

“We also have a learning package of parenting and adolescent development which are being taught to parents, particularly on how to handle their children who are entering their adolescent years,” he said.

“Family disintegration could mean one of the parents is absent or works abroad or they don’t give time and attention to their children and just provide them what they ask,” she said.

Arinto said teenage pregnancy should be checked as many young people could fail to finish their studies, depriving them of a good future.