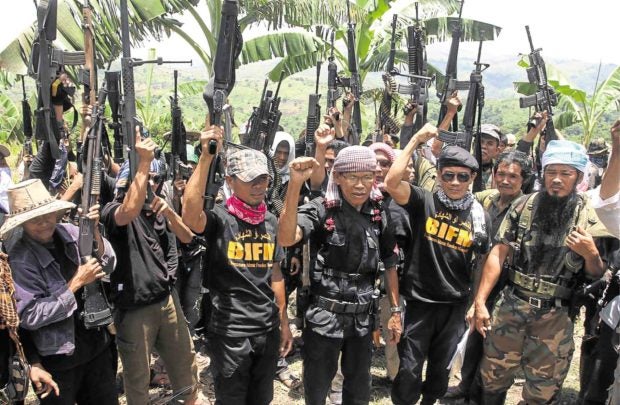 TERROR LINKS The Bangsamoro Islamic Freedom Fighters (BIFF), founded by the late Ameril Umra Kato (second from left), is among the Islamic State-linked armed groups that the government is fighting in Mindanao. Esmael Abubakar (right) now leads a faction of BIFF. —Jeoffrey Maitem

BULUAN, Maguindanao, Philippines — Groups allied with the Islamic State (IS) continue to recruit young Moros, luring them with at least P50,000 outright cash and a P10,000 monthly allowance, a top police official said on Sunday.

BIFF members have been especially targeting the young, out-of-school Moros to take up arms, Santiago said in a telephone interview.

“They are offered cash to become IS fighters,” he said.

The recruits, he said, were being indoctrinated with the wrong teachings of Islam, including violence.

The Oct. 3 clash erupted after BIFF men under Abubakar went to the MILF-controlled village, brandishing their high-powered firearms.

Santiago also said that once the presence of BIFF fighters was detected in the community, government forces would launch military operations in the area, which would send residents fleeing to safety.

Rommel Banlaoi, chair of the Philippine Institute for Peace, Violence and Terrorism Research, earlier told the Inquirer that foreign IS fighters were still going to Mindanao despite their defeat in Marawi City in 2017, to help local militant groups establish a caliphate in Southeast Asia.

Armed men belonging to the Maute Group, which had pledged allegiance to the IS, laid siege to Marawi in 2017. Government forces engaged them in a five-month battle that ended with the killing of the group’s leaders, brothers Omar and Abdullah Maute, and their top lieutenants.

But the bulk came from Indonesia and Malaysia, which both share maritime borders with the Philippines.

“The [foreign fighters] regard Mindanao as the new land of jihad (fight against enemies of Islam), safe haven and alternative home base,” Banlaoi said.

To counter IS recruitment, Santiago said the Maguindanao police had been sending representatives to talk at the ‘madaris’ (Islamic schools) or with the ‘ustadz’ (religious scholar) to propagate the “true essence of Islam” as a religion of peace.

For Muslims in the Bangsamoro Autonomous Region in Muslim Mindanao, the real war “is the war to eradicate poverty and hunger,” he said.