MANILA, Philippines — The Supreme Court has suspended Lawyer Lorenzo “Larry” Gadon, legal counsel of Peter Joemel Advincula alias “Bikoy,” from the practice of law for three months due to his “abusive and offensive” language.

In a 10-page resolution dated June 26, 2019, the high court said it resolves to suspend Gadon for violation Canon 1, Canon 8 and Rule 8.01 of the Code of Professional Responsibility (CPR) with “stern warning that a repetition of the same act in the future will be dealt with more severely.”

The case stemmed from a 2009 complaint filed by a dermatologist against Gadon after the latter supposedly “unilaterally suspended” her from a health care institute without consultation from the board of directors.

In April 2009, the dermatologist’s working hours at her clinic were reduced. This prompted her to ask for restoration of the original clinic hours or else she would file criminal and administrative complaints. 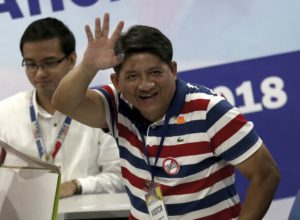 But Gadon wrote her a letter, saying the health care facility will revoke her privilege to practice dermatology at her clinic.

The complainant said Gadon’s words in the letter was “thoroughly unbecoming of a member of the bar to write.”

Gadon said, however, that what he stated in his letter-response was “frank, straightforward, equivocal and not very insulting” contrary to what the complainant said to him.

Gadon added that if anybody should be disbarred it should be the “complainant’s lawyer for being arrogant in sending a demand letter without first ascertaining the facts on which he could base his demands.”

The Integrated Bar of the Philippines’ (IBP) report of Commissioner Cecilio Villanueva recommended that Gadon should be suspended from the practice of law for four months.

Gadon became popular on social for short video clips showing him uttering the words “Hindi sila bobo [They are not stupid].”

The lawyer was also known for filing an impeachment complaint against then Chief Justice Maria Lourdes Sereno.

He was also the one who cursed and raised his middle finger against supporters of Sereno.

SC ruled that find the penalty of disbarment for Gadon as “too severe” and that “penalty of suspension, considering gravity and consequence of Gadon’s actions, to be the more appropriate penalty for the said case.”

SC said Gadon could be “convincing and articulate without using unprofessional and disrespectful language.”

SC also reiterated its reminder to lawyers that “though they are entitled to present their case with vigor and courage, such enthusiasm does not justify the use of offensive and abusive language.”

SC ordered Gadon to “report the date of his receipt to the resolution within five days of notice.”