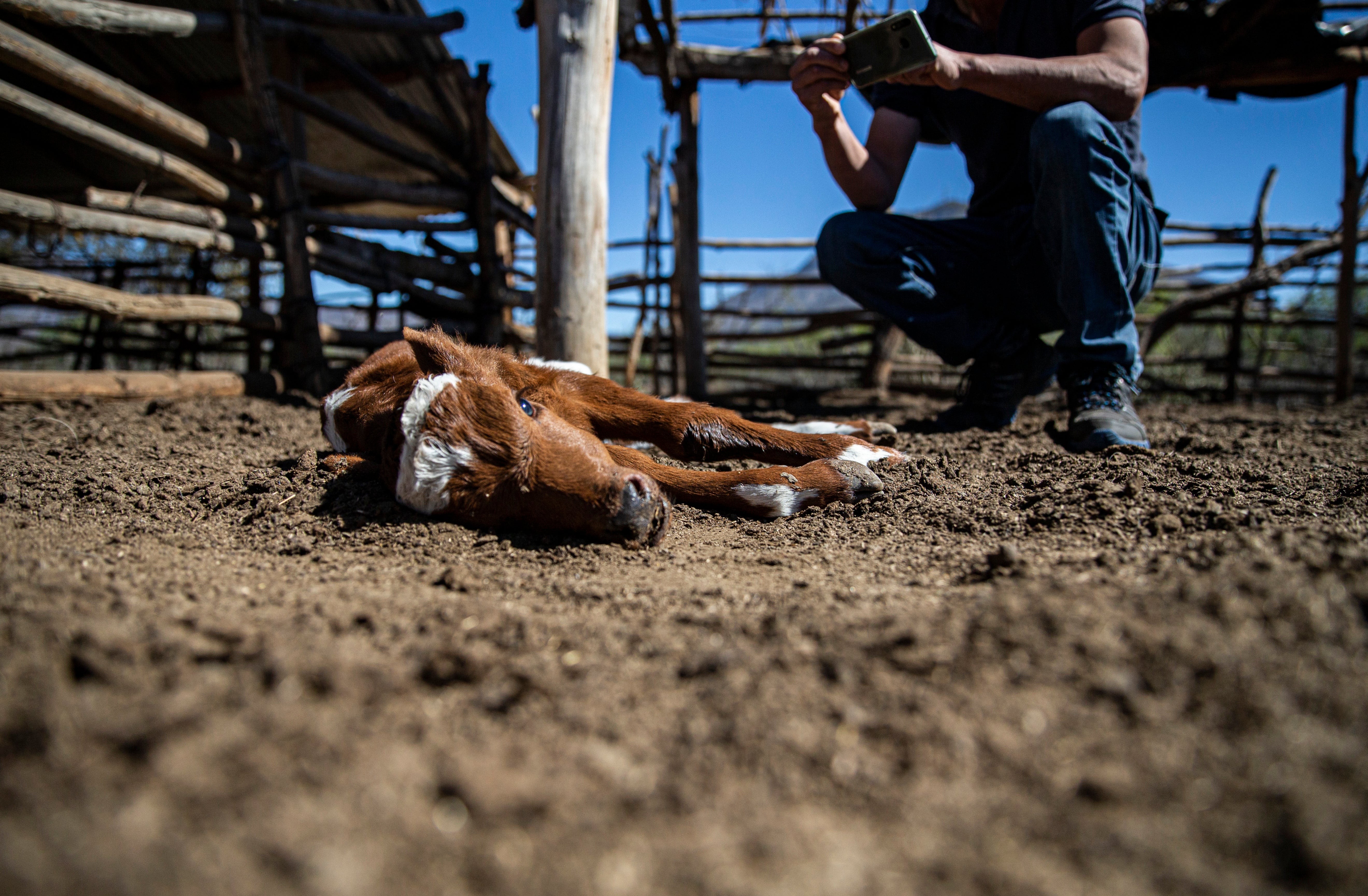 In this Sept. 23, 2019 photo, breeder Fredy Moreno takes a picture of a two-day-old dying calf on Alfredo Estay’s ranch in Putaendo, Chile, during the country’s worst drought in more than half a century. “I don’t count them because every day there’s a death,” he said. “I can’t take it any more. I don’t have anything to feed them, so the best thing would be to take them to the (barren) mountains so they die there (faster)’. (AP Photo/Esteban Felix)

PETORCA, Chile — For Erick Hurtado, the worst thing about the drought that has devastated his family farm in Chile is the dead animals.

“Going out and seeing the animals dead on the ground is so horrible,” Hurtado says as he gazes across the dusty paddocks of his farm in Petorca, near the coastal city of Valparaiso.

Farmers are counting the cost of one of the driest austral winters in six decades, which has destroyed crops and left tens of thousands of farm animals dead in the fields of central Chile.

Hurtado’s farm, owned by his grandfather, has lost half its 60 head of cattle.

So far, 106,000 animals have died due to lack of water and fodder, mostly goats, cattle and sheep, according to the agriculture ministry.

President Sebastian Pinera, who last month announced a $5 billion plan to improve water distribution, this week set up a crisis group of government agencies to tackle the water crisis, which he said had become “more extensive and more intense.”

In Colina, north of the capital Santiago, the drought has been hard on small farmers. Scrawny cattle pick at sprigs of strawy grass on pastures that have turned to dust. Cows, goats and horses roam hungry on hills have turned to a dry muddy brown.

“The drought has been disastrous for us,” said Sandra Aguilar. Her family owned about a hundred head of cattle. Today, only half survive thanks to a trickle of water provided by a neighbor who still has some reserves.

“The situation is complicated,” said Javier Maldonado, governor of the province of Chacabuco, where several agricultural areas have been hit particularly hard by the drought.

“We have to be realistic, climate change is here to stay,” he said.

Dominga Mondaca points out the deep fissures that run through the garden behind her house in the village of La Ligua near Valparaiso. The garden used to be full of strawberries and citrus trees; now it’s cracked earth.

“We have had many years with little water. But the last year, it didn’t rain at all,” said the 73-year-old, one of more than 600,000 people the government is supplying by tanker trucks as part of emergency measures.

She says she has had to give up raising chickens, in order to keep what little water she and her husband receive for their own consumption, washing and cleaning. Whatever is left, she uses to sprinkle on herbs in a small kitchen garden.

In Petorca, some rivers have run dry, and the landscape has been left parched, but lush avocado and citrus plantations are nevertheless thriving.

Locals in Petorca say the real, long-term problem is the mismanagement of water resources.

“There is an excess of monoculture plantations that consume all the water,” said Diego Soto of the Movement for the Defense of Access to Water, Land and Environmental Protection (MODATIMA) told AFP.

Avocados need a lot of water to grow, said Soto.

“An avocado tree needs 600 liters of water per week, whereas humans consume 50 liters a day, or 350 liters a week,” he said.

Producers refute these figures and say the real problem is a lack of infrastructure to store water, both above and below ground.

“The avocado is not a crop that needs more water,” insisted Francisco Contardo, chairman of the local producers’ committee.

Avocados are a key export for Chile, mostly to the US and China, but drought has reduced exports by 25 percent.

For many though, the changes being wrought by climate change are overwhelmingly obvious. Snow in the highlands of central Chile was relatively scarce this year.

Scientists predict an average decrease of between five and 10 percent snowfall every 10 years in almost the entire Andes mountains, one of the country’s main sources of water.

“The central zone of Chile is highly dependent on the summer melt season, its snow and glaciers, which means that if the snow cover is reduced, there is also a reduction in the availability of water resources,” said Paul Cordero, climate change expert at the University of Santiago.

Weak snowfall forced the country’s main ski resorts to use artificial snow machines much earlier and more often this season than in previous years.

“Chile has been living as if it were a country with an abundance of water,” said Pinera.

Read Next
B-17 crash raises questions about vintage plane safety
EDITORS' PICK
Powered by style, innovation and passion
Why Tagle is a leading papal contender
House energy committee chair Arroyo bats for cheap electricity
KWF has no power to ban, censor written works – Lagman
In Borongan, nuns play hoops (not mahjong)
A laptop that maximizes your WiFi so you can maximize your productivity
MOST READ
Why Tagle is a leading papal contender
Arjo Atayde reveals proposal to Maine Mendoza was ‘more than a year’ in the making
My neighbor FVR: From soldier to president
Zubiri on SRA mess: Shameful, disgusting
Don't miss out on the latest news and information.