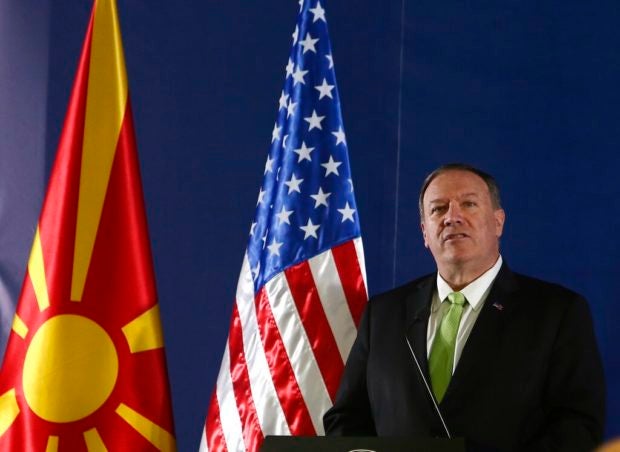 WASHINGTON — The State Department has been deeply shaken by the rapidly escalating impeachment inquiry, as revelations that President Donald Trump enlisted diplomats to dig up dirt on a political rival threaten to tarnish its reputation as a nonpartisan arm of U.S. foreign policy, former senior officials said Friday.

A department where morale was already low under a president who, at times, has seemed hostile to its mission is now reeling from days of disclosures that place it at the center of an escalating political scandal, say former diplomats who fear that the turmoil will damage American foreign policy objectives around the world.

“This has just been a devastating three years for the Department of State,” said Heather Conley, a senior policy adviser at State under President George W. Bush. “You can just feel there is a sense of disbelief. They don’t know who will be subpoenaed next.”

The first blow was the release of a rough transcript of the July 25 call between Trump and Ukrainian President Volodymyr Zelenskiy in which the American president pressed for an investigation of the son of former Vice President Joe Biden.

In the call, the president also disparaged the former U.S. ambassador to Ukraine, who was removed from her post in May amid a campaign coordinated by Trump lawyer Rudy Giuliani.

Thursday saw the release of text messages between Ukraine special envoy Kurt Volker and two senior diplomats as they scrambled to accommodate Giuliani’s campaign to leverage American support for Ukraine in a search for potential political dirt.

“This is only the latest in a large number of very damaging things that have been done to the State Department,” said Thomas Pickering, a former U.S. ambassador to the United Nations and Russia under President George H.W. Bush. “It represents a new low in basically ignoring and indeed punishing the people who have made a professional commitment to the country and Constitution.”

With Washington in tumult over the escalating impeachment inquiry, Secretary of State Mike Pompeo toured southeast Europe on Friday, trying to ignore the furor back home that has engulfed his department.

He did not respond to shouted questions on the topic from journalists at photo opportunities in Podgorica, Montenegro, and Ohrid, North Macedonia, and no questions were allowed at his scheduled press events in the two cities. His staff steadfastly refused to comment on the latest developments in the rapidly unfolding drama, including at a briefing for reporters at his last stop of the day in Athens.

Earlier this week in Rome, Pompeo acknowledged for the first time that he had been on the July 25 phone call between Trump and Zelenskiy.

House Democrats launched the impeachment probe over the Ukraine matter after a government whistleblower disclosed Trump’s call with Zelenskiy and the push to have a foreign government interfere in U.S. elections by digging up dirt on Biden.

Trump has sought, without evidence, to implicate Biden and his son Hunter in the kind of corruption that has long plagued Ukraine. Hunter Biden served on the board of a Ukrainian gas company at the same time his father was leading the Obama administration’s diplomatic dealings with Kyiv. Though the timing raised concerns among anti-corruption advocates, there has been no evidence of wrongdoing by either the former vice president or his son.

Trump has had a tense relationship with the State Department since he took office, repeatedly proposing to slash its budget, leaving key posts unfulfilled and choosing political appointees over career foreign service officers for ambassadorships to a greater degree than other recent presidents have.

His ouster of U.S. Ambassador to Ukraine Marie Yovanovitch, a respected career officer, and his dismissal of her as “bad news” in the call left many diplomats dismayed.

“This is a workforce that already feels besieged and undercut and in a perpetual defensive crouch,” said Derek Chollet, a former senior policy adviser in the Defense Department and State Department. “The lack of a vigorous defense of her is a signal that they are very vulnerable here. It just confirms their worst fears.”

Conley, now a program director at the Center for Strategic and International Studies, said the State Department had settled down a bit under Pompeo following the chaotic early part of the administration under former Secretary of State Rex Tillerson.

But now, she said, diplomats are conflicted and confused because everything has happened outside normal channels, with no regard for long-held processes.

Conley said that during her tenure at the department, even when there were disagreements between senior leaders, “there was a respect for hierarchy and the process.” And when something went wrong, there was a chain of command and a process that protected people.

But that has changed. “No one knows what’s going to happen next,” Conley said. “They’re all trying their best, but no one is untouched, no one is unharmed.”

She said foreign leaders who come to Washington can’t make progress on important issues because the Ukraine furor overwhelms the conversation, as it did during a visit by the president of Finland earlier this week.

Other former diplomats say U.S. standing around the world has been weakened.

“Even a hint of the President using the power of his office to advance his personal interests in an upcoming domestic election will undermine the U.S. in diplomacy and military affairs significantly — especially with our NATO allies, who are following all of this closely with real concern,” said James Stavridis, a retired Navy admiral who was the top NATO commander in Europe from 2009 to 2013.

“We have come into a situation where not only unpredictability is the hallmark of the United States, but unreliability as well,” Pickering said. “The wisdom and judgment that the United States was known for has been diminished.”