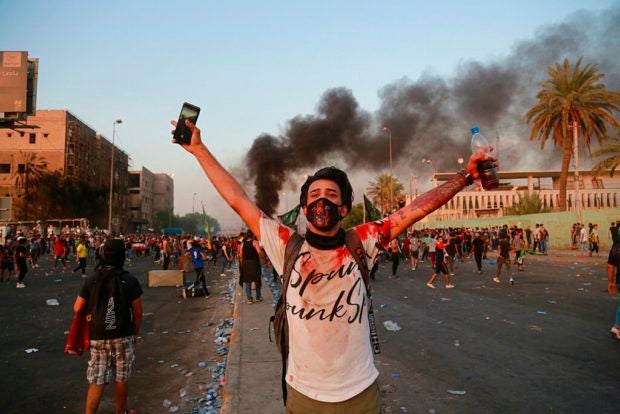 Anti-government protesters set fires and close a street during a demonstration in Baghdad, Iraq, Thursday, Oct. 3, 2019. Iraqi security forces fired live bullets into the air and used tear gas against a few hundred protesters in central Baghdad on Thursday, hours after a curfew was announced in the Iraqi capital on the heels of two days of deadly violence that gripped the country amid anti-government protests that killed over 19 people in two days. (AP Photo/Hadi Mizban)

BAGHDAD — Iraq’s premier on Friday urged anti-government protesters to go home, saying their “legitimate demands” have been heard while also comparing security measures imposed in the wake of this week’s violence, including a curfew, to “bitter medicine” that needs to be swallowed.

But dozens of protesters defied his message, gathering shortly before noon near the central Tahrir Square. Many had camped out on the streets overnight.

Security forces responded by firing live bullets to disperse the crowd near Tahrir.

Prime Minister Adel Abdul-Mahdi spoke in a televised address to the nation following three days of demonstrations that have spread across many provinces in the country. Since Tuesday, security forces have fired live rounds and tear gas every day to disperse the protesters, leaving 33 people dead and hundreds wounded.

Authorities have also cut internet access in much of Iraq since late Wednesday, in a desperate move to curb the rallies.

The rallies have erupted spontaneously, mostly spurred by youths wanting jobs, improved services such as electricity and water, and an end to endemic corruption in the oil-rich country

“We will not make empty promises … or promise what we cannot achieve,” Abdul-Mahdi said in his televised speech, broadcast at 2:30 a.m.

He said there is “no magic solution” to Iraq’s problems but pledged to work on laws granting poor families a basic income, provide alternative housing to violators and fight corruption.

“The security measures we are taking, including temporary curfew, are difficult choices. But like bitter medicine, they are inevitable,” he said. “We have to return life to normal in all provinces and respect the law.”

The prime minister also defended the nation’s security forces, saying they abide by strict rules against use of “excessive violence.” He said the escalation of the protests leads to violence.

He also said, without elaborating, that he “regrets some have successfully derailed some of the protests from their peaceful path” in order to “exploit” them for political reasons.

The unrest is the most serious challenge for Abdul-Mahdi’s year-old government, which also has been caught in the middle of increasing U.S.-Iran tensions in the region. Iraq is allied with both countries and hosts thousands of U.S. troops, as well as powerful paramilitary forces allied with Iran.

The mostly leaderless protests have been concentrated in Baghdad and in predominantly Shiite areas of southern Iraq, bringing out jobless youths and university graduates who are suffering under an economy reeling from graft and mismanagement.

After Abdul-Mahdi’s speech, Iraqis awaited what Grand Ayatollah Ali al-Sistani, the country’s top Shiite cleric, would say about the protests in his Friday sermon.

The city of Nasiriyah, about 320 kilometers (200 miles) southeast of Baghdad, has witnessed the most violence in the protests, with at least 16 people, including a policeman, killed.

Nasiriyah protester Haidar Hamid dismissed the speech of the prime minister, who also hails from the city. Instead, Hamid said he was looking to the Shiite religious authority for a resolution.

“We wait until Friday prayers,” said Hamid, an unemployed 32-year-old. “If the government is not dissolved, we will avenge our martyrs.”

A group that monitors internet and cybersecurity, NetBlocks, said internet was briefly restored before al-Mahdi’s speech but by the time he was on screen access was again shut as new videos emerged of the protests. The internet in Iraq’s northern Kurdish region has not been affected.

On Thursday, Iraq closed a border crossing with Iran in the eastern province of Diyala, saying it will remain closed until further notice. Protesters who had blocked sections of the road to Baghdad’s International Airport late Thursday had dispersed before daylight. /jpv