MGM Resorts settles Vegas shooting lawsuits for up to $800M

LAS VEGAS – Two years after a shooter rained gunfire on country music fans from a high-rise Las Vegas hotel, MGM Resorts International reached a settlement that could pay up to $800 million to families of the 58 people who died and hundreds of others who were injured, attorneys announced Thursday. 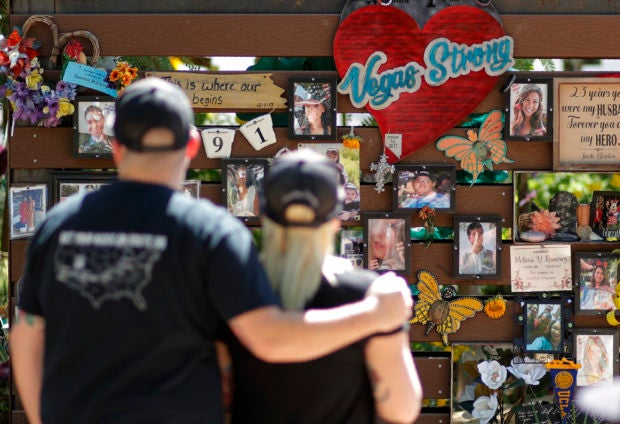 People visit a memorial garden for victims of a mass shooting in Las Vegas, Thursday, Oct. 3, 2019, in Las Vegas. Two years after a shooter rained gunfire on country music fans from a high-rise Las Vegas hotel, MGM Resorts International reached a settlement that could pay up to $800 million to families of the 58 people who died and hundreds of others who were injured, attorneys said Thursday. (AP Photo/John Locher)

It will resolve hundreds of lawsuits in multiple states that seek compensation for a range of physical and psychological injuries from the deadliest mass shooting in modern U.S. history and comes just two days after the anniversary of the Oct. 1, 2017, massacre.

Victims say the casino giant failed to protect 22,000 people at a concert venue it owns or stop the shooter from spending several days amassing an arsenal of assault-style weapons and ammunition in his suite at the Mandalay Bay resort.

Dr. Heather Melton, an orthopedic surgeon whose husband, Sonny, died shielding her from the gunfire, said she had mixed feelings about the settlement.

“There’s some good that comes from it: It will help give families closure and alleviates their ongoing medical costs,” she said. “But there’s no amount of money I would take to not get my husband back.”

The settlement creates the third-largest victims compensation fund in U.S. history, according to a claims administrator who has doled out money in major attacks and disasters. Kenneth Feinberg, who wasn’t involved in the Las Vegas deal, said he oversaw $7.1 billion in victim compensation after the Sept. 11, 2001, terrorist attacks and $6.5 billion following the 2010 BP oil spill in the Gulf of Mexico.

The amount of the settlement depends on the number of plaintiffs who take part, according to attorneys who represent thousands of people with claims against MGM.

“Our goal has always been to resolve these matters so our community and the victims and their families can move forward in the healing process,” said Jim Murren, chairman and CEO of MGM Resorts.

An independent administrator will be appointed by a court to allocate money from the settlement fund, attorneys and MGM said. James Frantz, a San Diego attorney who represents 199 victims, said he expected a formula to be worked out based on the severity of people’s injuries.

They expect to wrap up the work by late next year, a timeline that Feinberg called “very realistic.” Attorneys will get some of the money, but they wouldn’t say how much.

The settlement fund will disburse at least $735 million, which MGM’s insurers will cover. If claims reach $800 million, MGM would pay $49 million to fill the gap above its insured amount of $751 million.

Robert Eglet, a lead plaintiffs’ attorney, said a court battle could have taken a decade or more and that the deal would “provide the greatest good” for those reeling from the massacre.

“While nothing will be able to bring back the lives lost or undo the horror so many suffered on that day, this settlement will provide fair compensation for thousands of victims and their families,” he told reporters in Las Vegas.

Eglet said there are a few other lawsuits out there but the “short answer” is that everything is settled. Other lawsuits name the gunman’s estate, gun manufacturers, event promoters and others.

A country music festival became a killing ground when a 64-year-old retired accountant and high-stakes video poker player fired out the windows of his hotel room into the crowd.

Stephen Paddock killed himself as authorities closed in, and they found 23 assault-style weapons in his room, many equipped with bump stocks that allow firearms to fire rapidly like machine guns.

Police and the FBI found that Paddock meticulously planned the attack and theorized that he may have sought notoriety. But they said they never determined a clear motive.

As legal claims piled up, MGM drew outrage when it filed lawsuits last year against more than 1,900 victims in a bid to avoid liability. The company argued that it didn’t owe anything to survivors or families of slain victims under a federal law enacted after 9/11.

Chelsea Romo, a 30-year-old single mother of two from Temecula, California, lost her left eye and still has shrapnel lodged in her brain. Of the settlement, she said, “I don’t think anything could ever be enough” because “you can’t bring people back.”

She told reporters in San Diego that she’s on “high alert” in public places and hopes the deal will lead to measures that make those places safer.

“The past can’t be changed,” she said. “I guess as far as going forward, if things can be safer and better, that’s all I really could ask for.” /gsg