NEW YORK — CNN says it has rejected two advertisements submitted by President Donald Trump’s re-election campaign because they weren’t factual, but will run a third ad that was submitted on Thursday. 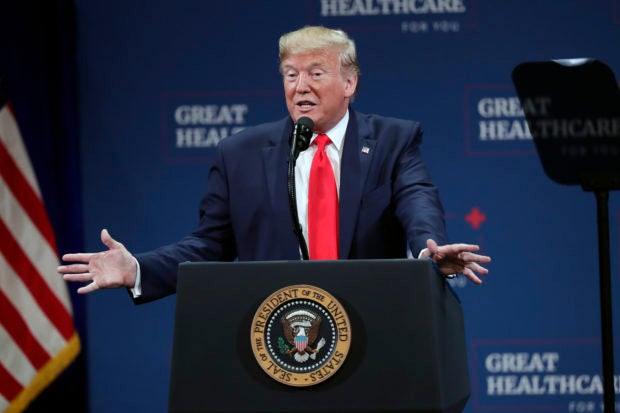 Trump’s campaign likened CNN to a public relations firm for Democrats after the rejection of its first advertisement, which discussed allegations against former Vice President Joe Biden that the network said had been proven false by several news organizations.

The ad accuses Democrats of trying to “steal” an election by opening an impeachment inquiry on the president, and says that “media lapdogs” fall in line. At that point, the screen flashes pictures of CNN’s Chris Cuomo, Don Lemon, Jim Acosta and MSNBC’s Rachel Maddow.

CNN said disparaging its employees is grounds for rejection, too.

The network has been a frequent target of the president, who on Thursday suggested that “we ought to start our own network and put our own news out there.”

His campaign spokesman, Tim Murtaugh, said “CNN spends all day protecting Joe Biden in their programming, so it’s not surprising that they’re shielding him from truthful advertising too.”

Murtaugh wouldn’t discuss where the campaign had also submitted the Biden ad. It’s not uncommon for campaigns or advocacy groups to make ads they know will be rejected, hoping to get more publicity for that action than they would if the commercial actually aired.

Another ad submitted to CNN and its corporate cousin Turner Sports on Thursday was rejected. CNN said the ad contains assertions about the whistleblower complaint against Trump that have been disputed by the intelligence inspector general, and uses the word “coup” to describe the impeachment process set forth in the constitution.

A third ad was accepted. While the ad says “the swamp” hates Trump, flashing video of House Speaker Nancy Pelosi, it outlines actions taken in the president’s first term and asserts that it takes a “tough guy” to change Washington. /gsg