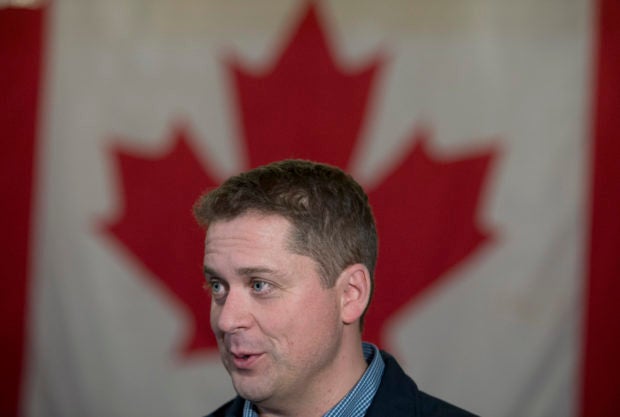 Conservative Leader Andrew Scheer speaks to the media following a campaign rally in Dartmouth, Nova Scotia, on Thursday, Oct. 3, 2019. A Canadian flag is in the background. (Jonathan Hayward/The Canadian Press via AP)

Scheer and the Conservative party have criticized previous party leaders for holding dual citizenship in the past.

Scheer spokesman Cory Hann said Scheer filed paperwork with the U.S. government in August saying he was renouncing his citizenship and is currently awaiting confirmation from the U.S. Embassy in Ottawa.

Hann said Scheer and his sisters received U.S. passports as children but Scheer has not renewed his as an adult. Hann said one of Scheer’s parents was born in the U.S. and immigrated to Canada. The Globe and Mail first reported the news.

In 2005, Scheer criticized Canada’s then governor-general, Michaelle Jean, for having dual Canadian-French citizenship.

“He was hypocritical in his attack on Michaelle Jean and it is good that it is now exposed,” said Nelson Wiseman, a political science professor at the University of Toronto.

Scheer also said Thursday that he opposes abortion but would not reopen debate on Canada’s law allowing abortions. He had dodged the question after being grilled by Trudeau at a debate Wednesday night ahead of the Oct. 21 parliamentary elections. /gsg