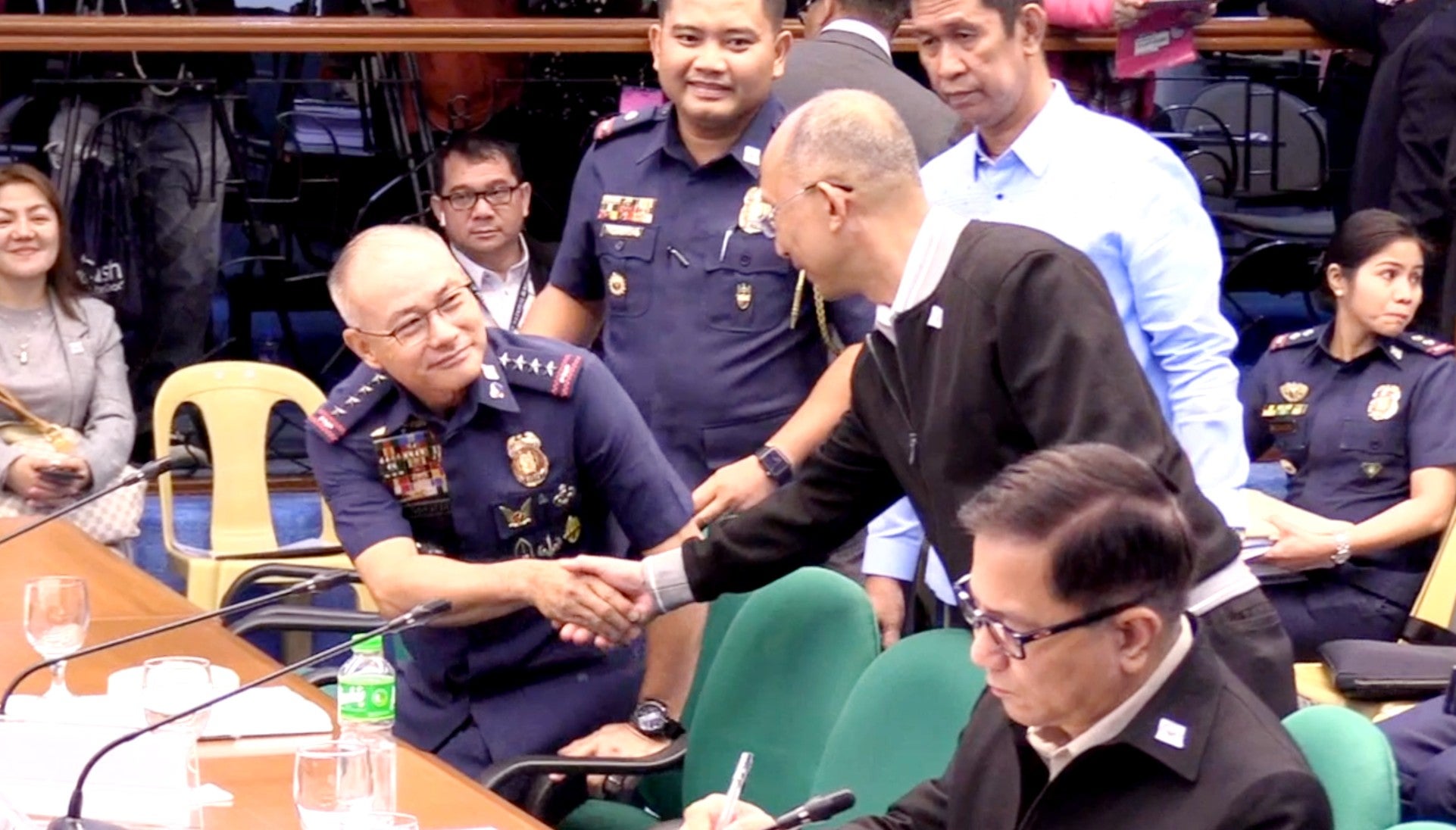 Philippine National Police chief Gen. Oscar Albayalde came under more fire in the Senate on Thursday after Philippine Drug Enforcement Agency (PDEA) chief Aaron Aquino changed his tune and said Albayalde had asked him to stop the dismissal of Pampanga policemen who were implicated in the pilfering of more than 100 kilos of confiscated “shabu” (crystal meth) in 2013.

Former PNP Criminal Investigation and Detection Group chief Benjamin Magalong also said Albayalde should have seen the red flags in the Pampanga policemen’s antidrug operation, which an investigation found to have been full of holes.

It actually netted about 200 kilos of shabu but only 38 kilos were reported, and the wrong drug suspect was arrested, the investigation found.

In the House of Representatives, militant lawmakers called for the resignation of Albayalde and all other policemen involved in the pilfering of seized illegal drugs.

In a resolution, the lawmakers belonging to the Makabayan party list bloc said the resignation of Albayalde and the other officers would clear the way for a credible investigation of the irregularity.

At the Senate hearing, Aquino modified his story after earlier saying that Albayalde, who was then the National Capital Region Police Office chief, had only asked about the status of the case of the Pampanga policemen and wanted it reviewed.

According to Aquino, he had been under pressure in the past few days because of threats to his family, which came in the wake of his disclosures that drug recycling involving law enforcers remained rampant.

But it was never his intention to malign the PNP and only wanted its ranks cleansed, Aquino said.

“I am in deep pressure and quandary during the last hearing. I was thinking of my family who are now put in much deeper danger,” he said.

Aquino said a friend called him a few days ago to confirm that some people were plotting against his family.

“The exact words are, ‘Sir, they are preparing something for your family,’” he said.

Aquino said the information devastated him. At one point, he said, he asked himself if the fight against illegal drugs was worth it, especially since his youngest child was only 12 years old.

It was then that Aquino told the hearing that while Albayalde did ask him about the status of the case of the Pampanga policemen, he also requested him “not to implement the order yet.”

Aquino said he asked why, and Albayalde told him that the officers where his men.

“I answered, ‘Oca, I will have the case reviewed by legal and I will assign your people to Mindanao,’” he said.

At the time of Albayalde’s call, the Pampanga policemen had a pending motion for reconsideration contesting a November 2014 order for their dismissal.

The motion was resolved in 2017, after Aquino’s retirement, and their penalty was downgraded to demotion.

Aquino, when asked, agreed that his impression during the call was that he was asked to stop the implementation of the dismissal order.

He also said he had not been aware of the case and had not given it much attention because he had a lot of other things to do. After giving the orders for the case to be reviewed, he was overcome by work, he said.

In response, Albayalde said his phone call did not influence Aquino’s decision, and that Aquino even reassigned the policemen to Mindanao.

Albayalde also told reporters that Aquino could not have implemented the dismissal order anyway as there was a pending motion for reconsideration.

It was also pretty normal for anyone to call someone to ask about the status of the case of his men, he said.

Magalong, in his testimony,  said Albayalde failed to act on red flags concerning the 2013 operation.

Magalong noted that the 2013 operation was massive, given the size of the drug haul.

But several procedures were not followed, he said.

Under the rules, the crime scene must be secured without touching the evidence, and a crime lab chemist must be present.

There should also be photos and a walk through using a video, and the pieces of evidence must be marked, Magalong said.

A provincial police director’s normal course of action is to first keep the drugs where they have been seized and then call his higher-ups and the press to show these, he said.

Even assuming for the sake of argument that Albayalde had not been updated on the operation, Magalong said that when the policemen brought the seized drugs to his office without proper labels, Albayalde should have started asking questions.

The provincial director should have also wondered about the absence of the chemist, the lack of pictures and the improper inventory, Magalong said.

“These should have triggered red flags in a provincial commander. He should have thought something is wrong in this operation and that should already trigger an investigation,” he said.

He was not accusing Albayalde of anything, he said.

“It’s just that, why was there no logical action from the provincial director when in fact, there was glaring violation committed by the operating troops,” Magalong said.

In response, Albayalde said there was always presumption of regularity in any police operation.

He also said that initially, there was no indication that there had been something irregular in the operation and “it was presumed to be a good accomplishment.”

It was only later that the irregularities surfaced, he added.

Albayalde also cited the report of retired Brig. Gen. Manuel Gaerlan, who had investigated the operation, which found that there was no evidence or testimony implicating him in any irregularity.

Also during the hearing, Sen. Panfilo Lacson asked the PNP to reinvestigate the administrative liability of the policemen involved, led by Supt. Rodney Baloyo IV.

Albayalde said he would do this.

But Gordon said the probe should also include Albayalde.

Gordon said he believed Albayalde would be overtaken by events after the inquiry, and surmised that the PNP chief might be asked to retire early.

“Maybe the President will ask him to retire. I don’t have any special knowledge, it’s just my feeling,” Gordon told reporters.

Gordon’s justice committee cited Baloyo for contempt after the senators accused him of lying and being evasive about the 2013 drug operation.

He was grilled for insisting that the operation took place in the afternoon, even after the committee presented barangay officials and policemen who said it was carried out in the morning.

The policemen also said that the suspect they arrested after the operation was not the same one that Baloyo’s team presented to the press later.

Magalong earlier alleged that the suspect arrested was freed for P50 million and a fall guy was brought in to take his place. —WITH A REPORT FROM MELVIN GASCON