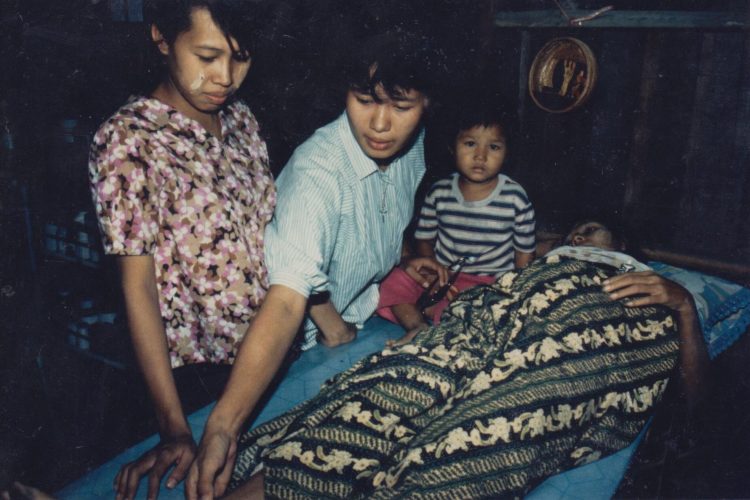 Maesot is a town in Thailand bordering Burma that has become the crossroad for Burmese people seeking better lives.

It was once known as an NGO capital because of the huge population of refugees and migrants from Burma seeking shelter there.

Due to its unique location, Maesot is rapidly becoming a developed city.

In March 2019, a bridge, worth at least 3 billion baht, was opened across the Moei River and served as a link between Thailand and Burma.

Since then, scores of workers from Burma cross the bridge to work in Thailand. Some return at 6 p.m. before the border closes. But life stirs under the bridge at night. During this time, undetermined numbers of Burmese cross the river, mostly ethnic minorities who fled diseases and nearly certain death in their mountain homes.

It was the same way that a 29-year-old ethnic Karen doctor took, along with hundreds of Burmese, to flee the Burmese government crackdown on students, activists, professionals and ethnic peoples during the pro-democracy uprising of Sept. 19, 1988. 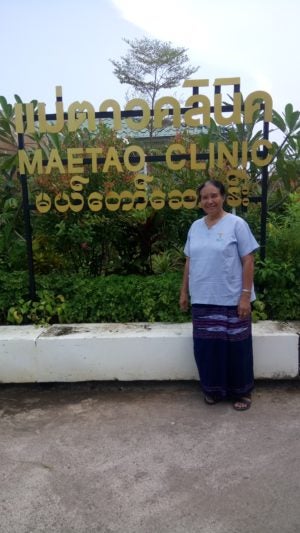 Dr. Cynthia Maung, an ethnic Karen, was born in 1959 in Yangon and grew up in Moulmein, the capital of Mon State in Burma.

After internship at Moulmein General Hospital, Maung served people in the villages but growing tension in Burma drove her to flee, too. Activists disappeared, thousands were arrested, tortured and killed. On Sept. 21, 1988 she and 14 colleagues joined the exodus through the Thai-Burma border.

“We walked for seven days crossing from village to village until we reached the border of Thailand,” said Maung.

In Thailand, Maung attended to the wounded and sick Burmese refugees at a small hospital in Tha Song Yang District. She moved to a refugee camp in Maesot. There, she made contact with Karen leaders, Thai authorities and church groups.

In a community called Mae Sot, Maung had found her role.

Mae Tao is 7 kilometers from the city of Maesot and despite a highway connecting Thailand to Burma, it remained isolated. The only form of transportation is a truck that ferries mostly sick migrants to hospitals and back.

The Mae Tao Clinic became known for being built out of sheer determination and dedication.

It was founded in February 1989 with the help of a Thai who helped purchase the site. Its appearance is deceptive—a two story dilapidated house would not appear like a clinic. But limited resources did not dissuade Maung and relief workers from helping those crossing the border.

The clinic is nearly bare. Maung brought doctor’s tools which she fit into a woven bag she carried all the way from Burma. The visible signs that Maung is a doctor are her stethoscope, a pair of surgical scissors, two pairs of forceps, a thermometer, a blood pressure cuff, a medical textbook and a few bottles of basic medicines. She uses a rice cooker to sterilize her instruments.

Language was a challenge because refugees spoke in different tongues. But the opening of a clinic was a welcome development. Thai authorities gave help for vaccination and family planning programs in 1995.

If there’s something unique in the clinic, it’s that most of its 200 medical staffers are ethnic Karen. Volunteer doctors from Britain and the Netherlands come to visit regularly.

In 2017, many NGOs moved back to Burma when the government there relaxed its policy on foreign presence and humanitarian efforts. This reduced funding for the Mae Tao Clinic, which prompted clinic staffers to collect payment from those who can afford.

There are currently 140 patients and 200 outpatients that the clinic serves. Minor surgeries are doable but more serious ones are referred to the Maesot Hospital.

If there’s anything the clinic could present as some sort of a record, it’s the number of babies delivered there every year, according to Maung. “We deliver around 2,000 babies yearly,” she said.

At the clinic, refugees are asked only if they are documented or undocumented, not their ethnicity. “We help them as much as we can,” said Maung.

Maung said although Burma is catching up in terms of development she still expected an influx of migrants in the coming days.

“There is no home for them because their villagers are destroyed to give way to investors,” she said. “They do not have land titles.”

After the ceasefire between separatists and the Burmese military, Maung said more investments had started to pour in. Burmese who find work do not have rights and wages are insufficient, she said.

“In Thailand, they are more protected,” Maung said, explaining why Burmese people still migrate to Thailand.

Maung has received many awards for community service since 1999. In 2002, she was a Ramon Magsasay awardee for community leadership. In 2018, she received the N-Peace Award from the United Nations Development Program. But she refused to take all the credit.

“There are many community leaders working in conflict areas and migrant communities who are not very well-known,” she said.

“It is important to work together and acknowledge the leaders working under difficult circumstances. These awards help uplift the community,” Maung said.

Does she miss home in Burma? Maung said home is not a place but a community “where you can build relationships and create a better system.”

But despite being in Thailand for at least 30 years, Maung is still considered to be “stateless.” She uses travel documents issued by the Thai government. She has not returned to Burma. Her children, though, had been given Thai citizenship.

“I call the country Burma because I was born when the country is Burma. The military changed everything, our money, the name of the country, the flag and even the capital city,” Maung said.

She has high hopes for Burma, though, under Aung San Suu Kyi.

She said Suu Kyi is in a very tight spot “because the military controls power.”

“She has to be very careful. She wants to be part of national reconciliation so compromises are gradually happening,” Maung said of Suu Kyi.

Shifting to her adopted country, Thailand, which would host the Asean summit, Maung said development must emanate from the community.

Real development, she said, would not be possible “without equal economic empowerment and equity resources.”

“We need more of civil society to monitor the governance of countries,” she said./tsb

Read Next
DOJ chief says lowering age of criminal responsibility must be studied carefully
EDITORS' PICK
Timeless Elegance in the Philippines’ Most Distinguished Home Kitchens
James Reid, Nadine Lustre confirm split
Pilot test of motorcycle taxis may be ended early
Asean accepts Trump invite to US meet
What exactly did Vilma Bautista — Imelda’s ex-aide — do?
‘A greener, cleaner tomorrow’: A how-to guide for Filipinos who want to help with today’s energy crisis
MOST READ
Taal Volcano and surroundings have become ‘inflated’
Ayala Land bares facts on Technohub deal: P4B in lease to UP
If Marcos runs in 2022 polls, he must accept results – Robredo
Pilot test of motorcycle taxis may be ended early
Don't miss out on the latest news and information.