Poe raised this suggestion during the Senate hearing for the 2020 budget of the Department of Transportation (DOTr), saying that those who will ride these premium train coaches may pay P200 to P300, which is higher than the normal fare for ordinary trains at MRT-3.

“May nagsabi sa akin. Ewan ko if this is something you can consider. But habang ginagawa ninyo ‘yung Dalian trains, baka daw pwedeng a few specific coaches or trains will be designated as business coaches,” she said. 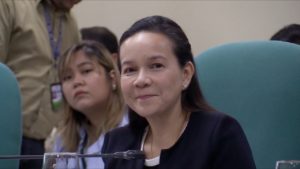 [Someone told me this suggestion. I don’t know if you can consider this, but as you are dealing with the Dalian trains, maybe you can allot a few specific coaches or trains to be designated as business coaches.]

“Meron silang [Commuters will have] guaranteed space and designated line. Bakit? Because ‘yung mga tao [Why? Because these people] who can afford to pay that amount are probably those who have private vehicles,” she added.

She said she initially thought that the suggestion would be “discriminatory,” but added that the public also pay higher prices for better services, such as in business-class fights.

She added that revenues from this project will also help the DOTr implement more projects that will serve the riding public.

For his part, Transportation Secretary Arthur Tugade said planned railway lines in other parts of the country also have three classes of trains — regular, business or first class, and express trains.

“Pwede nating pag-aralan, kapag nakuha na natin yung tamang numero na mag-o-operate (We can study that once we already have the number of trains that can operate),” he added.

During the hearing, Tugade also reiterated that the DOTr is no longer seeking the granting of emergency powers to help solve traffic woes in Metro Manila.  /muf