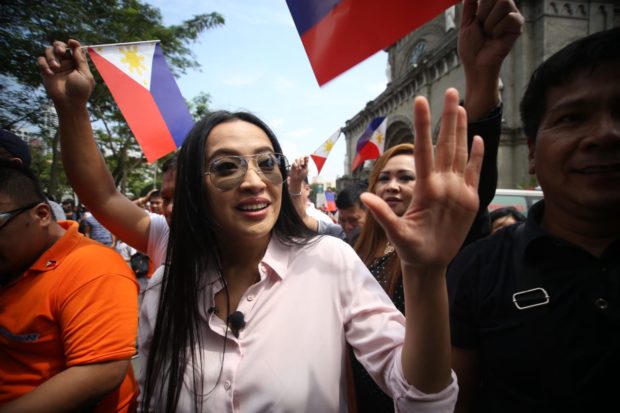 MANILA, Philippines — Former assistant presidential communications secretary Mocha Uson’s involvement in the controversial rescue of Filipino migrant workers in Kuwait last year should’ve already disqualified her from landing the second highest post in the agency overseeing the welfare of this country’s citizens who are working overseas, a migrants’ group said on Tuesday.

Militant migrant workers’ group Migrante said that Uson’s previous actions were not only “contradictory” to the mandate of the Overseas Workers Welfare Administration (Owwa) but also “detrimental” to migrant workers.

“[Uson’s] actions have been more detrimental than helpful to the interests of [migrants], such as the ‘rescue mission’ she conducted in Kuwait last year—a publicity stunt that only placed the lives of our migrant workers in harm’s way,” Migrante said in a statement.

In April last year, the Philippines was forced to apologize to the Kuwaiti government after the rescue by diplomatic staff of distressed Filipino workers in the Gulf state, which described it as “inappropriate behavior” and an infringement of its sovereignty.

Uson was implicated in the rescue, as she supposedly posted a video of it on her Facebook page. She denied doing so in an interview in May last year.

But her critics, among them blogger Jover Laurio, noted that even if Uson did not post the video, she helped “promote” the rescue mission.

In the video, Uson asked people who had relatives and friends in Kuwait whom they wanted to be rescued to just provide her the details so that these could be relayed to the diplomatic office.

“[President] Duterte is putting the hard-earned money of [migrant workers] at easy disposal of a government official with a record of wasting people’s money in purveying fake news and senseless junkets,” Migrante said.

“It is clear that Duterte is not serious in resolving the mounting problems facing [migrants] and we are extremely concerned that discriminatory practices in the delivery of services to [overseas workers] who are not loyal to Duterte will be rampant,” it added.

Meanwhile, migration expert Emmanuel Geslani said the President should “find a more useful position” for Uson, as he was afraid that “she might just clutter up the organization.”

President Rodrigo Duterte first hired Uson, a dancer and blogger who supported his campaign for Malacañang, in January 2017 to serve on the Movie and Television Review and Classification Board.

After just four months, he appointed her to the Presidential Communications Operations Office, where she soon came under intense criticism for her crass social media posts.

She resigned in October last year amid a controversy over a video on federalism that critics deemed in bad taste.

Uson tried to gain a seat in the House of Representatives through the party list system, but her group AA Kasosyo lost the sectoral vote in May’s midterm elections.

The announcement of her new appointment on Monday as deputy administrator of Owwa drew objections from labor groups, which questioned her qualifications and trustworthiness.

Julius Cainglet, president of the Federation of Free Workers, said Uson did not have the “managerial and administrative skills” needed at the Owwa post she was taking.

The media and art group Let’s Organize for Democracy and Integrity said there were more qualified, deserving and trustworthy career officers at Owwa who could serve as deputy administrator.

Bayan Muna Rep. Ferdinand Gaite pointed out that Uson could not yet be appointed to any government job because she had yet to clear the yearlong ban on appointments for electoral losers.

The Commission on Elections (Comelec), however, said the ban did not cover Uson because in the party list system the parties and not their nominees were the candidates.

Kontra Daya, a group fighting electoral fraud, on Tuesday added its voice to the opposition to Uson’s return to government service.

“Under this administration, nothing is surprising. Political irregularity is the new normal,” said Danilo Arao, a convener of Kontra Daya.

After Uson, Arao said President Duterte supporter Ronald Cardema, who also lost his bid for a House seat through May’s party list election, could be the next to be reappointed to a government job.

“Cardema could be next indeed since, just like Uson, he has endeared himself to Duterte as a blind supporter,” Arao said.

The Comelec disqualified Cardema, a former head of the National Youth Commission, as first nominee of Duterte Youth because he was overage.

Arao urged Congress to expand the one-year ban on appointments to include the nominees of losing party list groups.

“While it may be argued that the party list system provides for election of party list groups, it is better for those in power to exercise prudence in giving out appointments to [their] favored individuals clearly rejected by the voters,” Arao said.

Arao pointed out that Uson will receive P155,030 in monthly salary as deputy Owwa administrator.

“This translates to P1.86 million annually. Lest we forget, her salary [will] come from the people’s taxes. This all the more necessitates the need to expose the appointing authority’s temerity and Uson’s audacity,” Arao said.

But Bishop Ruperto Santos, chair of the Catholic Bishops’ Conference of the Philippines’ Episcopal Commission on Migrants and Itinerant People, expressed hope that Uson would do better at Owwa.

“With her second chance with government office, it is our prayer and hope that she will do better,” Santos said.