Albayalde: ‘Ungentlemanly’ for Magalong to ‘put words into mouth of somebody else’ 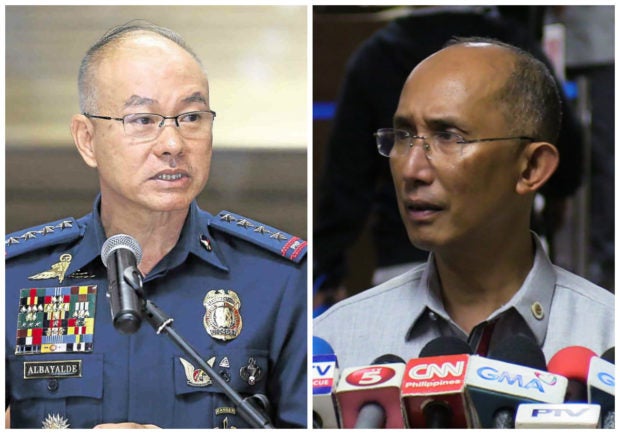 “Of course, tingnan n’yo naman (look), he is putting words into the mouth of somebody else. I think this is very ungentlemanly of him and very (unstatesmanlike) of somebody who is occupying a position in the government,” Albayalde said of Magalong, a former PNP-Criminal Investigation and Detection Group (CIDG) chief, in an ambush interview.

Magalong earlier alleged that Albayalde intervened in the case of his former men who were accused of making millions off of seized illegal drugs from an operation in Pampanga in November 2013.

Albayalde, however, denied Magalong’s allegation saying he does not know the motive behind the latter bringing up the issue after six years especially when those cops involved in the said operation were already dismissed.

Asked whether they share a bad history, Albayalde said he was not sure about Magalong and brought up how the latter asked him for help back then.

“As I’ve said, there was even once upon a time in his life na nanghingi pa ng tulong ‘yan sa akin. Nung way back na siya ay floating from 2006 to 2010. At one time dun nakapag hingi pa sya ng tulong sa akin, but of course siguro, selective memory ‘yan,” he added.

(As I’ve said, there was even once upon a time in his life where he asked me for help. Back when he was floating from 2006 to 2010. At one time, he was able to ask me for help, but of course, maybe there is selective memory.) /kga

ADVERTISEMENT
Read Next
DOE, ERC ordered to comment on case vs circular on 3rd party selection of distribution utilities
EDITORS' PICK
IATF to LGUs: Issue ordinances vs attacks on frontliners, COVID-19 patients
10 Filipinos positive for COVID-19 in UK, 7 in Ireland — envoy
Nograles: Cabinet members to donate 75% of monthly salary to aid COVID-19 fight
Diokno to Duterte: OK to make fun of buck tooth, but focus on people’s needs first
Robredo spox thanks Duterte for defending VP’s efforts vs COVID-19
Quick chat with Nicole Andersson: ‘You really don’t need much to be happy’
MOST READ
Coronavirus hotbed Rizal to shut borders on April 6
Gov’t mulling quarantine period extension of 15-20 more days
ADB warns PH against prolonged lockdown
Sotto on Isko Moreno’s call: We do our job without the media following our every move
Don't miss out on the latest news and information.