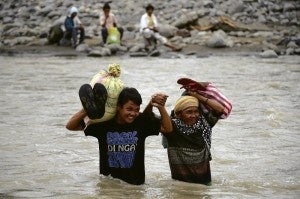 STILL with a reason to smile, two flood survivors in Iligan City carry relief goods distributed on Christmas Day, as they safely cross the Kapay River, one of the local waterways that recently overflowed and turned deadly at the height of Tropical Storm “Sendong.” AFP

As many as 150 more bodies were recovered in Iligan City on Christmas Eve, bringing the total death toll from the flash floods and landslides unleashed by Tropical Storm “Sendong” on Dec. 16-17 to over 1,200, authorities said.

“What’s sad is that the number goes up every day. The body count is now 1,236,” Benito Ramos, executive director of the National Disaster Risk Reduction and Management Council, said in a phone interview from Iligan City on Christmas Day.

But hope continued to spring even as tens of thousands of flood survivors queued for their Christmas meal in packed evacuation centers in the devastated city.

Aurelio Magaro, council chair of Barangay Digkilaan, joined 422 other survivors in lining up for food in the courtyard of a school that was flattened by the overflowing Mandulog River.

“We have a sad Christmas this year, but we remain hopeful that we will recover,” said Magaro, who told Agence France-Presse (AFP) that he lost 15 relatives to rampaging floodwaters.

Ramos, who spent the previous week in equally devastated Cagayan de Oro City, said the search for bodies would continue “as long as it takes.”

“If it will be like this every day, then there will be no Christmas and no break until the New Year. If every day we will find victims, then the [retrieval] operations will have to go on,” Ramos said.

Only when rescuers do not find a single body in three days will the search be called off, he said.

Ramos did not provide a breakdown of the total death toll, but based on official reports, only the body count in Iligan had climbed—from 312 to 468, of which 371 had been identified.

The number of recovered bodies in Cagayan de Oro remained at 674, of which 273 have been identified.

Ramos said many bodies had been recovered as far as Oroquieta City in Misamis Occidental, 65 kilometers from Iligan, prompting authorities to widen the search.

He said that with the aid pouring in, there were enough provisions for the survivors’ basic needs, such as food, water and clothing.

“We are running out of warehouses. That’s why we are looking for a storage place to accommodate all the relief goods,” Ramos said.

He said more people were needed to repack relief goods, to augment the staff of the Department of Social Welfare and Development, the military personnel, and even reservists who had been at the task.

Authorities next have to see to building core shelters for the displaced families.

Ramos said a relocation site had been identified in Cagayan de Oro, but none yet in Iligan.

“This will take some time. This cannot be completed in one month, even three months or six months, because there are too many” shelters to build, he said.

Ramos had earlier said about 33,000 persons lost everything in the flash floods, “so we have to sustain them for a period of three, four, or even five months before they can be relocated to the core shelter.”

At the evacuation center in Digkilaan, an elderly woman in the food queue wondered how they could celebrate Christmas.

“We have no money and our houses are gone,” said the woman who, like Barangay Captain Magaro, is temporarily sleeping at a nearby chapel.

Iligan health officer Levy Villarin told AFP that city facilities including schools and gymnasiums were sheltering 57,000 people, including at least 5,000 who had lost their homes and others whose dwellings were choked with mud.

“Some of them do not want to return to their homes because of the traumatic experience that they suffered. They had lost their relatives there,” Villarin said.

He said some had to be relocated within the week before students return from the Christmas holidays but that permanent relocation sites still had to be identified and structures built.

In Cagayan de Oro City, the efforts of residents to clear their homes of mud and debris are being stymied by mountains of garbage blocking roads, pathways and sewage systems.

“We hope the government will help us clean up,” Richard Legaspi said.

Nearly 10 days after Sendong’s assault, the smell of death still fills the air. The corpses of dead pets and livestock have been stuffed in sacks and piled together with the uncollected garbage.

Elena Naliponguit, 53, of Barangay Consolacion, said that while everyone was cleaning up, the damage was simply overwhelming.

“We need volunteers to help us rebuild,” she said. “But we cannot start rebuilding with all this garbage lying around.”

Naliponguit said the city government had been sending two dump trucks daily since Dec. 23 but that there was just too much trash.

She said she was worried that the garbage might now be clogging the drainage system. “I cannot imagine what will happen if it rains heavily again,” she said.

The lack of running water is compounding the residents’ problems.

Water flows only from 3 a.m. to 6 a.m. in most barangays, and the water supplied by fire trucks is sufficient only for drinking.

Naliponguit said volunteers from private companies like Del Monte had come with their own cleaning materials but there was still no sustained effort to completely cart away the garbage.

Legaspi, of Isla Bugnaw, a community that sits on a river delta beside Barangay Consolacion, said more dump trucks should be sent over.

Maj. Eugenio Osias IV, spokesperson of the Army’s 4th Infantry Division, said personnel from the 52nd Engineering Brigade had been involved in clearing operations since Dec. 17 but had focused initially on recovering bodies.

“Now that retrieval operations are tapering off, we will shift our efforts to helping residents rebuild,” Osias said. With reports from JB R. Deveza, Inquirer Mindanao, and AFP