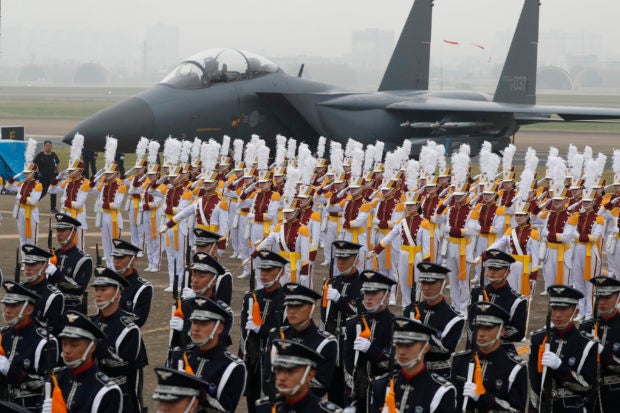 SEOUL — South Korea on Tuesday displayed some of its newly purchased U.S.-made F-35 stealth fighter jets for the first time during its Armed Forces Day ceremony, a development that will likely infuriate rival North Korea.

Under its biggest-ever weapons purchase, South Korea is to buy 40 F-35 fighter jets from Lockheed Martin by 2021. The first few batches of the aircraft arrived in the South this year. North Korea has sharply reacted to the deliveries, calling them a grave provocation that violates recent inter-Korean agreements aimed at lowering military tensions.

On Tuesday, President Moon Jae-in reviewed military planes including an F-35, missiles and artillery systems that were displayed on the ground at the start of the ceremony at an airbase in southeastern South Korea.

Moon and other top officials later watched three F-35s and other warplanes flying in close formation one after another.

In a televised speech during the ceremony, Moon said he felt “secure about the might of our military armed with new equipment such as F-35As that we disclosed for the first time.” He said South Koreans would also be “very proud” of the military capacity.

South Korea previously publicized photos of its F-35s, but it was the first time the aircraft was shown at an official event since the first two of the planes were delivered here in March, according to the state-run Defense Acquisition Program Administration.

Moon, a liberal who espouses greater reconciliation with North Korea, was behind a flurry of North Korea-U.S. diplomacy on the North’s nuclear program. During his third summit with North Korean leader Kim Jong Un in Pyongyang last September, the two Koreas struck a set of agreements meant to ease military animosities such as halting front-line live-fire exercises and dismantling guard posts along their border.

Moon said during Tuesday’s ceremony that strong national security would support dialogue and cooperation with North Korea and an effort to build a lasting peace on the Korean Peninsula.

Nuclear diplomacy largely remains stalled since the second summit between Kim and President Donald Trump in Vietnam in February collapsed due to disputes over U.S.-led sanctions on North Korea. Kim and Trump held a brief, impromptu meeting at the Korean border in late June and agreed to resume diplomacy. /kga