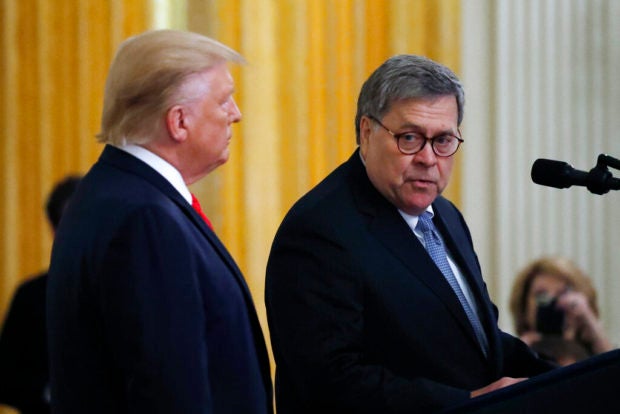 In this Monday, Sept. 9, 2019, file photo, Attorney General William Barr speaks as President Donald Trump listens during a ceremony in the East Room of the White House, in Washington. Trump recently asked the Australian prime minister and other foreign leaders to help Barr with an investigation into the origins of the Russia probe that shadowed his administration for more than two years, the Justice Department said Monday. Sept. 30. (AP Photo/Alex Brandon, File)

WASHINGTON — President Donald Trump recently asked the Australian prime minister and other foreign leaders to help Attorney General William Barr with an investigation into the origins of the Russia probe that shadowed his administration for more than two years, the Justice Department said Monday.

The revelation underscores the extent to which Trump remains consumed by special counsel Robert Mueller’s investigation, and the ways in which he has used the apparatus of the United States government to investigate what he believes are its politically motivated origins. It also highlights Barr’s hands-on role in leading that investigation, including traveling overseas for personal meetings with foreign law enforcement officials.

Trump’s interactions with foreign leaders — and Barr’s role in those discussions — are under heightened scrutiny now that the House has launched an impeachment inquiry into the president. The probe centers on Trump’s summertime call with Ukraine’s president, revealed by a whistleblower CIA intelligence officer, in which Trump presses for help investigating Democrat Joe Biden.

The president has sought, without evidence, to implicate the Bidens in the kind of corruption that has long plagued Ukraine. Hunter Biden served on the board of a Ukrainian gas company at the same time his father was leading the Obama administration’s diplomatic dealings with Kyiv.

Though the timing raised concerns among anti-corruption advocates, there has been no evidence of wrongdoing by either the former vice president or his son. There is no evidence that Biden’s son was ever under investigation in Ukraine.

The July 25 call by Trump to Ukrainian leader Volodymyr Zelenskiy prodding him to dig up dirt on Biden was separate from the numerous conversations Trump had with foreign leaders as part of the investigation into the Russia probe.

Trump was requesting help for U.S. Attorney John Durham’s investigation into the origins of special counsel Mueller’s probe into Russian interference in the 2016 election. The investigation outraged Trump, who cast it as a politically motivated “witch hunt.”

Durham’s investigation has been cheered by Trump allies, who believe the original FBI probe into Russia’s election interference was driven by Democrats.

Barr traveled to Italy last week with Durham, where the two met with government officials as part of the investigation, a person familiar with the matter told The Associated Press. As part of his investigation, Durham is examining what led the U.S. to open a counterintelligence investigation on the Trump campaign and the roles various countries played in that probe. The attorney general’s presence on the trip exemplifies how much of an active role the nation’s chief law enforcement officer is taking in overseeing the investigation.

Mueller wrapped up his report earlier this year with an inconclusive finding about Trump — the president was not charged with any crimes, but Mueller pointedly said he did not exonerate Trump. The president promptly called for an investigation into the origins of the Mueller probe.

Justice officials said that has involved seeking help from numerous foreign countries, including Australia. The FBI’s counterintelligence investigation that later became the Mueller probe was triggered, in part, from a tip from an Australian diplomat. George Papadopoulos, a former Trump campaign adviser, had told the diplomat, Alexander Downer, in May 2016 that Russia had thousands of stolen emails that would be potentially damaging to Hillary Clinton.

Papadopoulos, who served as a foreign policy adviser to Trump’s campaign, had learned from a Maltese professor that Russia had “dirt” on Clinton in the form of stolen emails. The FBI’s investigation into potential coordination between Russia and the Trump campaign later morphed into part of Mueller’s probe.

One official said Trump told Prime Minister Scott Morrison that the attorney general would be contacting his Australian counterpart.

Morrison’s office said in a statement, “The Australian government has always been ready to assist and cooperate with efforts that help shed further light on the matters under investigation.”

“The P.M. confirmed this readiness once again in conversation with the President,” the statement said, referring to Morrison.

Papadopoulos pleaded guilty to lying to the FBI about the 2016 conversation with the professor, Joseph Mifsud, and served a nearly two-week sentence in federal prison. /jpv