NEW YORK – For years, teens flocked to Forever 21’s massive stores at the nation’s malls for its speedy take on fashion, like its $5 shimmery halter tops and $25 dresses. 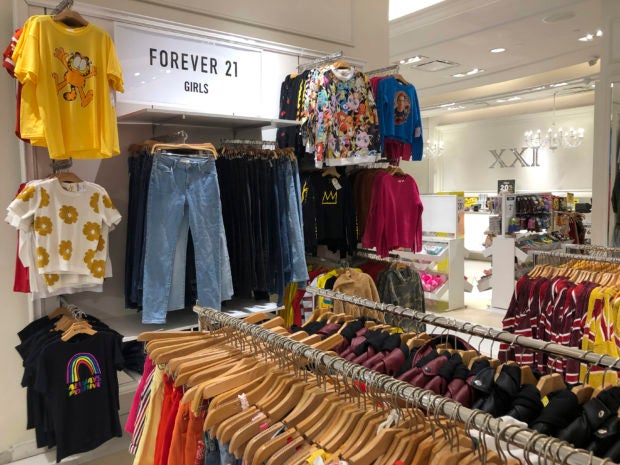 A Forever 21 store is shown, Monday, Sept. 30, 2019, in Aventura, Fla. The low-price fashion chain, a one-time hot destination for teen shoppers that fell victim to its own rapid expansion and changing consumer tastes, has filed for Chapter 11 bankruptcy protection. (AP Photo/Wilfredo Lee)

But the chain that helped popularize so-called fast fashion has moved too slow for a new generation of young customers.

The Los Angeles-based privately held chain filed for Chapter 11 bankruptcy Sunday, a victim of rapidly changing shopping tastes among teens who are increasingly turning away from malls and heading to trendy online sites.

They’re also interested in buying eco-friendly fashions, like pants made from recycled plastic, not stuff they’ll just throw away after a few uses.

And they’re gravitating toward online second sites where clothes can be used over and over again.  In fact, the secondhand fashion business is projected to reach $64 billion by 2028, nearly 1.5 times the size of fast fashion, according to a report by Global Data Retail.

The bankruptcy marks a dramatic fall for the retailer. Forever 21 was founded in 1984 and, along with other fast-fashion chains like H&M and Zara, rode a wave of popularity among young customers that took off in the mid-1990s.

It even stole customers from traditional stalwarts like Abercrombie & Fitch and American Eagle.

Their popularity grew during the Great Recession, when shoppers sought fashion bargains. But Forever 21 went on an aggressive expansion just as shoppers were moving more online.  Now, it’s closing as many as 350 stores globally, including as many as 178 stores in the U.S. As of the bankruptcy filing, it operated about 800 stores globally, including more than 500 stores in the U.S.

The company says it will still operate its e-commerce business, which accounts for 16% of total sales.

“The world has changed, and Forever 21 didn’t change with it,” said Stacey Widlitz, president of SW Retail Advisors. “And the walls closed in, in terms of the competition.”

Widlitz and others noted that the chain was also dogged by the deteriorating quality of its clothing.

Still, fast fashion isn’t dead; it’s just being reinvented. Swedish chain H&M, which has struggled to keep up with competitors, is showing signs of a comeback and is reinventing itself by offering more eco-friendly fashions. The chain, which once set the standard for speed by flying in frequent small batches, is also digitizing certain areas of its manufacturing process.

Primark, which is based in Ireland and owned by Associated British Foods, opened its first location in the U.S. in 2015. Now the fashion chain, which sells $10 jeans and $4 T-shirts, has nine locations in the U.S. and is faring well.  It too is focusing more on the environment and announced last month a dramatic increase in its sustainable cotton program.

Sonia Lapinsky, a managing director in the retail practice at AlixPartners LLP, says a retailer’s success isn’t just about speed.

“They need to deliver the right products, the right story and be sustainable, “she said.

Here are three big hurdles for fast-fashion companies like Forever 21:

Over the last 10 years or so, a slew of online-only fashion retailers have popped up with names like Fashion Nova, Nasty Gal and Boo Hoo. For example, Boo Ho says it drops more than 100 new products daily.

“These sites are curated better and they’re fun,” said Widlitz.

They also can afford to have lots of sales since they’re not weighed down by physical stores. Each also dedicates a section on their website to their code of conduct regarding working conditions at factories and their environmental efforts. For example, online fashion site Asos says that this year, cashmere, mohair, feathers, down silk, bone horn and shell will be banned from its websites.

Young consumers are also looking at digital natives like Allbirds and Everlane that are not fast-fashion sites but offer fashion basics that are easy on the environment. That’s forced many traditional retailers including fast-fashion chains to develop products that are made of recycled material or change their manufacturing process.

In fact, H&M says that by 2020 all of its cotton will be sourced in a more sustainable way, meaning recycled, organic or through the Better Cotton Initiative, the largest cotton sustainability program in the world.  This year, H&M launched a new section on its website that details where its products were produced, who the suppliers were, the names and addresses of factories and the number of workers they employ. In addition, customers can find out more about the materials used to make a specific garment and learn how to recycle it.

THE RISE OF MICRO TRENDS

It used to be that fast-fashion retailers would embrace one big global trend and push it to their stores. Now, they’re contending with lots of micro trends as young shoppers follow influencers on social media. So retailers like Forever 21 and others need to come up with smaller deliveries of more diverse clothing to cater to different shoppers’ tastes, analysts say.

“The cool kid is more likely to get clothes on Etsy than at H&M,” said Jason Goldberg, chief commerce strategy officer at Publicis Communications. /gsg