newsinfo / Headlines
Headlines
Cleaning up agency hit by corruption ‘a once in a lifetime opportunity,’ says Bantag

BuCor chief to crooks: Get out 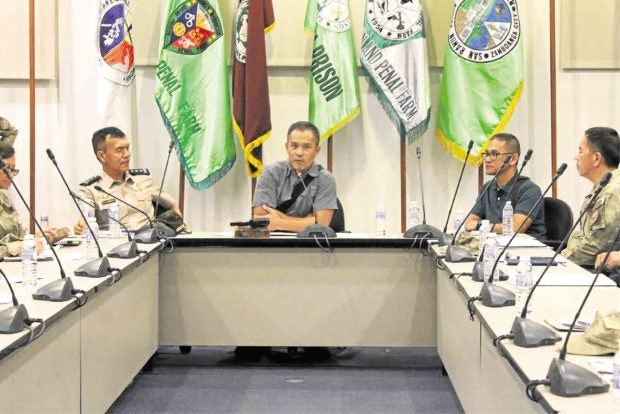 PREVENTIVE MEASURE BuCor chief Gerald Bantag (center) has banned cell phones among personnel, including himself, to stop corruption at the agency. —PHOTO COURTESY OF BUCOR PIO

MANILA, Philippines — On his first day as head of the Bureau of Corrections (BuCor), Gerald Bantag warned crooks in the agency to start packing up their things.

“You have no place in BuCor. Leave now while you still have time,” he said on Monday to those who would refuse to support his plan to reform the corruption-hit bureau.

Among the orders Bantag received from the President upon his appointment to the BuCor were to clean up the mess caused by the improper implementation of the good conduct time allowance (GCTA) law and to stop the illegal drug trade at the New Bilibid Prison in Muntinlupa City.

Bantag took note of the claim of former Criminal Investigation and Detection Group chief, now Baguio City Mayor Benjamin Magalong, that “all roads lead to Bilibid” when it came to the illegal drugs network in the country.

“If this is true, then this is not just a disgrace to ourselves, but [also] to our uniform and mandate that the public entrusted to us,” Bantag told his men. “This is why the people are mad at us.”
Series of controversies
Mr. Duterte earlier ordered a revamp of the bureau after multiple controversies were unearthed during an ongoing Senate hearing initially on the early release of heinous crimes convicts.

The Senate has also started looking into the GCTA credits for sale scheme operated by some BuCor officials, the sale of hospital passes for as much as P2 million and inmates who continue to operate their drug trading businesses on the outside.

The Office of the Ombudsman earlier ordered the six-month suspension of 30 BuCor personnel and officials involved in the GCTA mess.

Bantag described his orders as “big challenges I accept wholeheartedly,” because for him, cleaning up the BuCor would be a “once in a lifetime opportunity.”

He said the agency’s problems were caused by “negligent and apathetic employees who got contented receiving their monthly paychecks and payoffs from the inmates.”

“We will reform BuCor. It is not yet too late,” Bantag assured his men. “We will regain order among our ranks, and the respect and faith we lost from our countrymen.”
Cell phone ban
As a way to address these issues, he ordered a ban on cell phones among the BuCor personnel, including himself.

He said he had also requested permission to bring in his trusted men from the Bureau of Jail Management and Penology (BJMP) to help him clean up the agency.

Before his appointment to the BuCor, Bantag was the BJMP director in the Mimaropa region. He also served as the warden of the city jails in Malabon, Navotas, Valenzuela, Parañaque and Manila.

During his stint at the Parañaque City Jail, he was charged with murder, a case that was later downgraded to homicide, after a grenade blast in his office killed 10 inmates, including two Chinese nationals, on Aug. 11, 2016.