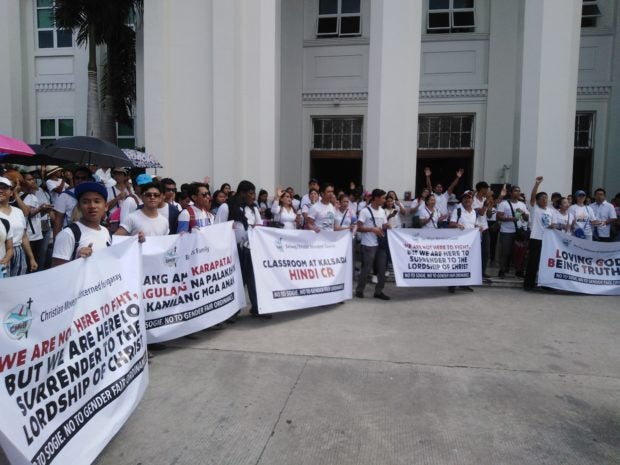 Members of the Christian Ministers Council of Bulacan hold a prayer rally in front of the Bulacan Provincial Capitol to oppose the Sogie bill and a provincial ordinance on gender equality. Photo by Carmela Reyes-Estrope

CITY OF MALOLOS — About 3,000 born-again Christians in Bulacan province on Monday staged a prayer march here to protest the proposed gender-fair ordinance of the province and the Sex Orientation and Gender Identity and Expression (Sogie) Equality bill.

The protesters, who belong to various born-again Christian groups under the Christian Ministers Council of Bulacan (CMCB), carried placards bearing messages opposing the passage of resolutions and laws protecting the rights of the LGBTQ (lesbian, gay, bisexual, and transgender) community in the province.

The groups marched from the City of Malolos Sports and Convention Center and gathered in front of the Capitol building where Pastor Frederick Fernandez, chair of CMCB, led the prayer rally.

The protest was accompanied by a live band aboard a mobile truck and was also marked with singing and chanting, “Sogie bill hindi kailangan, batas ng Diyos ipaglaban (We don’t need Sogie bill, let’s fight for God’s law).” /kga