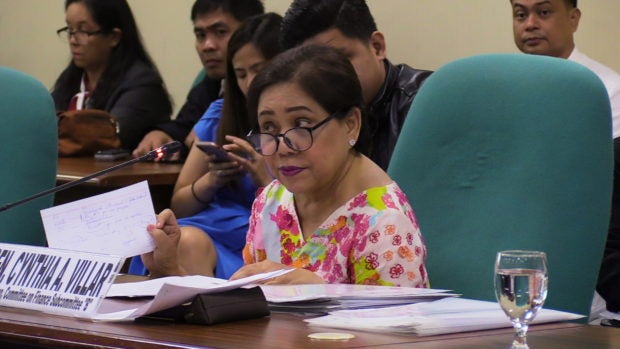 MANILA, Philippines — “Dapat barilin kayo sa Luneta (You should be executed at Luneta).”

An exasperated Senator Cynthia Villar said this Monday when the issue of underspending for the implementation of the Sugarcane Industry Development Act (Sida) was brought up during the hearing of the Senate finance subcommittee on the proposed budget of the Department of Agriculture and its attached agencies for 2020.

From the P2-billion budget a year, Villar noted that the allocation for the law is now down to P500 million due to underspending.

“My God, how can you underspend?” she said. “Bakit n’yo pa pinasa sa amin ‘yung Sida law tapos hindi n’yo pala gagastahin? (Why did you pass that Sida law to us and then [you will not spend the fund intended for it])”

(We even had a hard time passing it. We also felt bad because we thought we’re helping the sugar farmers only to find out that the money would not be spent for it. So, why did we pass the law?)

It was not the first time that Villar blew her top over the same issue.

Last month, the senator berated the officials of the Sugar Regulatory Administration (SRA) for its failure to spend the funds allotted for Sida.

Villar interjected and comforted Zubiri by saying that all other senators attending an agriculture hearing also feel the same way.

“You’re not the only one. They are all saying, all the senators, every time they go to the agricultural hearing, they get mad,” she added. /kga