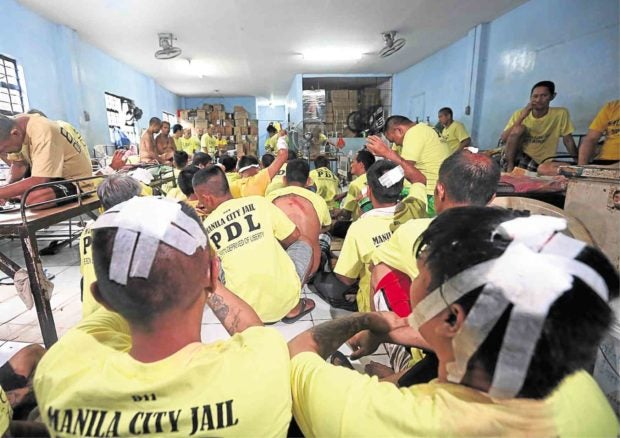 BRAWL AFTERMATH Inmates of the Manila City Jail who suffered minor injuries during a riot seek treatment at the infirmary. —MARIANNE BERMUDEZ

MANILA, Philippines A riot that erupted on Sunday morning in a dormitory at the Manila City Jail left two inmates dead and 32 others hurt.

Senior Insp. Jayrex Bustinera, the jail’s public information officer, said that the brawl took place in Dorms 11 and 12 around 6:30 a.m. during a head count and while the prisoners were having breakfast. It lasted around 10 minutes.

Bustinera added that before the riot broke out, two inmates from rival groups — the Sputnik Gang and Batang City Jail — reportedly fought over sleeping space.

This was confirmed by the leader of Dorms 11 and 12 who later told reporters that the two had argued over space and “kicked each other.”

“The tension grew [among] inmates. Others thought that their friend was being ganged up against,” he said.

A riot ensued and some of the inmates were hurt when they joined the brawl while the others suffered injuries as they were fleeing from the scene.

Both sustained head trauma and were rushed to Jose Reyes Memorial Medical Center where doctors declared them dead on arrival.

Authorities have yet to confirm if the deceased were the ones who started the riot.

Seven prisoners were also taken to the hospital for serious injuries but the 25 others had only minor wounds that were treated at the city jail infirmary, Bustinera said.

He clarified that the inmates did not use sharp objects such as knives during the riot.

The 2.4-hectare Manila City Jail has a total population of 5,350, more than three times its capacity. Bustinera said that Dorms 11 and 12 currently housed 800 inmates although these were built for only 200 occupants.

The dormitory building looks like a house enclosed by a concrete fence with a small yard.

In 2016, Manila City Jail officials stopped assigning inmates to dormitories based on their gang affiliations because of the growing population. Dorms 11 and 12 used to house only Sputnik Gang members.

Asked how the Good Conduct Time Allowance (GCTA) controversy had affected morale inside the prison, the dorm leader said that inmates had lost their motivation to study. “Most of my students [have] stopped attending classes because they think that they will no longer benefit from GCTA,” he added.