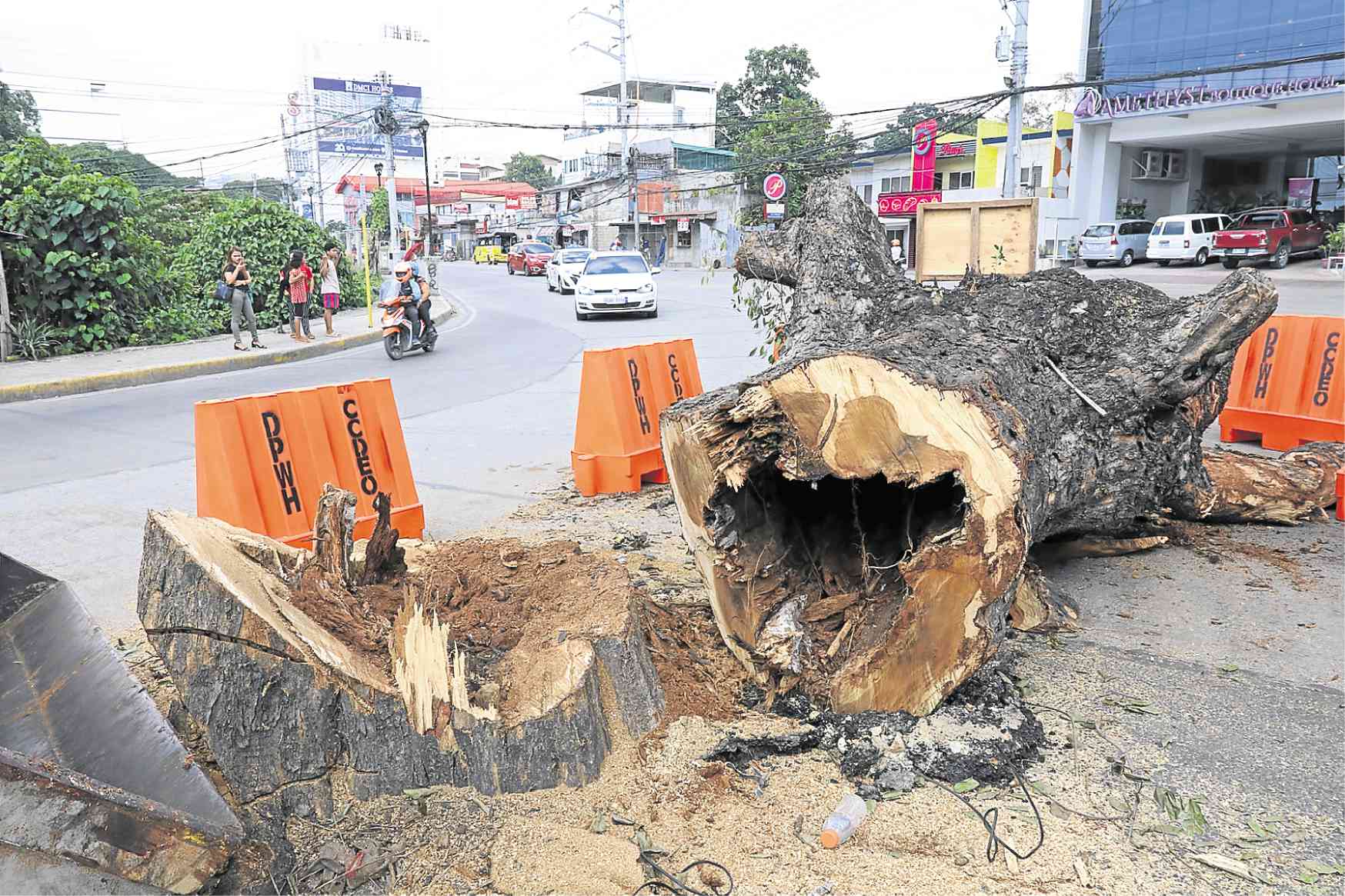 GONE Personnel of the Department of Public Works and Highways cut down this century-old old tree along M.Velez Street at Barangay Capitol Site in Cebu City. —Jowence Niña L. Mendoza

CEBU CITY—Cebuanos are mourning over the loss of five century-old trees that have been cut down to give way to a road-widening project of the Department of Public Works and Highways (DPWH) in this city.

Gloria, 77, who asked not to be named, said she was devastated when she saw DPWH personnel cut the trees last week. She said the trees were already at the Barangay Capitol Site way before she was born.

But she added she had not heard any road accident due to the trees. “[The accidents] are usually the fault of drivers,” she added.

The Department of Environment and Natural Resources (DENR) allowed the DPWH in Central Visayas to cut four narra trees and one mahogany tree on M. Velez Street in Barangay Capitol Site.

“The DENR came up with the revision after delay in the processing of tree-cutting permits was identified as one of the causes of the slow implementation of the government’s ‘Build, Build, Build’ program,” Melicor said in a statement.

Before the issuance of a special tree-cutting permit, he said the DPWH complied with the necessary requirements which included, among other things, the endorsements from the concerned local governments.

In an endorsement dated July 19, Manuel Guanzon, head of Barangay Capitol Site, issued no objection on the cutting of trees. The trees were cut on Sept. 21 and 22 with the supervision of the DENR, he said.

He said the planting of 500 seedlings to replace the five trees that were cut was also complied with by the DPWH.

The cutting of the century-old trees, however, drew flak from Cebuanos.

“Who’s bright idea is this please? While other advanced countries are preserving their heritage trees, we are displaying our backwardness again by cutting ours down,” Penelope Arriola said in a post on Facebook.

Nigel Villarete, an urban planner and environmentalist, said the cutting of the trees did not in any way hamper the traffic flow in the area.

“The traffic flow disruption and the increased danger were introduced by unplanned and unwanted widening at that corner. Everybody knows [I hope]  that a sudden widening followed by a sudden narrowing of a road will introduce a disruption in speed and direction as people rush towards a suddenly wide area only to be constricted back,” said Villarete in a post on Facebook.

The trees near the Cebu capitol, he said, could have added a “nice, green island in the middle for everyone to enjoy instead of the drab endless concrete we call roads.” —WITH A REPORT FROM ADOR VINCENT MAYOL