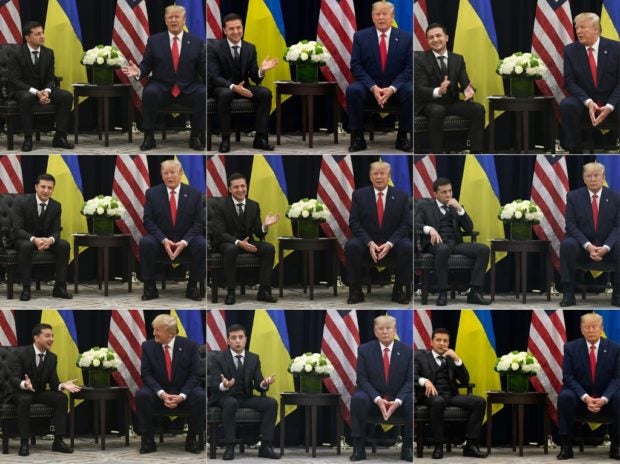 This combination of pictures created on September 26, 2019, shows US President Donald Trump speaking with Ukrainian President Volodymyr Zelensky during a meeting in New York on September 25, 2019, on the sidelines of the United Nations General Assembly. (Photos by SAUL LOEB / AFP)

WASHINGTON — The White House scrambled to “lockdown” records of President Donald Trump’s phone call pressing for Ukraine’s interference in next year’s US election, an incendiary whistleblower complaint released Thursday alleged, in the latest episode of an intensifying impeachment drama.

The complaint caps a stunning week of revelations that have put Trump’s presidency in jeopardy, with his administration, the Justice Department, and State Department all engulfed in the mushrooming scandal.

It alleges that White House officials said they had likely “witnessed the president abuse his office for personal gain” in the July call with Ukrainian leader Volodymyr Zelensky.

The alleged misconduct centers on Trump urging Zelensky to investigate the US leader’s political rival, Joe Biden – prompting the complaint and triggering a congressional impeachment probe.

The whistleblower, who says he spoke to at least six US government officials, concluded that Trump was “using the power of his office to solicit interference from a foreign country in the 2020 US election.”

“I learned from multiple US officials that senior White House officials had intervened to ‘lockdown’ all records of the phone call, especially the official word-for-word transcript of the call that was produced,” he wrote.

House Speaker Nancy Pelosi led a chorus of Democratic condemnation of Trump and those alleged to have hidden the call’s full transcript on a limited-access electronics record system.

“This is a cover-up,” she told reporters.

Trump has “betrayed his oath of office, our national security, and the integrity of our elections,” Pelosi said.

The speaker launched an official impeachment inquiry on Tuesday. As of Thursday, a majority of the 435-seat House of Representatives, 218 Democrats and one independent, said they support the probe.

In private remarks to staff at the US mission to the United Nations, Trump attacked the intelligence officer as “almost a spy” and likened the whistleblower complaint to treason.

The whistleblower presented the nine-page complaint on August 12 to the inspector general of the intelligence community.

That official, a Trump appointee, found it credible and of “urgent concern” and forwarded it to the acting Director of National Intelligence (DNI).

But DNI Joseph Maguire initially refused to deliver the complaint to Congress, but it was ultimately declassified, and Congress released it Thursday.

Trump acknowledges he urged Ukraine to launch an anti-corruption probe against Biden – a frontrunner in the race to take on the president in the 2020 election – and Biden’s son.

On the call, Trump said he was enlisting US Attorney General Bill Barr and personal lawyer Rudy Giuliani – a private citizen – to coordinate with Ukrainian officials on the investigation.

Trump has said he exerted “no pressure” on Kiev, a claim echoed by Zelensky.

But critics maintain that the president held up $400 million in military aid to Ukraine, to be released only if it investigated the Bidens.

At a fundraiser in California on Thursday, Biden said Trump would “like to get foreign help to win elections.”

Biden added there’s not been “one shred of evidence” showing wrongdoing by his family.

The non-verbatim record of the call did not show Trump explicitly tying aid to Zelensky’s probing Biden, and the White House said the complaint showed Trump did “nothing improper.”

“The White House will continue to push back on the hysteria and false narratives being peddled by Democrats,” Trump’s press secretary Stephanie Grisham said.

Soliciting foreign help in a US election is illegal, whether or not inducements are offered.

Maguire testified before the House Intelligence Committee that he earlier withheld the complaint because Trump’s call was subject to executive privilege.

But Maguire also said he thought the whistleblower “did the right thing.”

While several Republicans including House Minority Leader Kevin McCarthy defended Trump and condemned the whistleblower complaint, some said they are deeply troubled.

“There is a lot in the whistleblower complaint that is concerning,” House Republican Will Hurd tweeted Thursday. “We need to fully investigate all of the allegations.”

Maguire insisted he does not know the whistleblower’s identity.

On Thursday, The New York Times reported that he is a male CIA officer who was detailed to the White House.

That prompted a terse statement from his lawyer, who did not confirm his client’s employer and warned that any decision to report identifying information would be “reckless, as it can place the individual in harm’s way.”

The Times also reported that the CIA officer had first anonymously shared general allegations with his agency’s top lawyer about a Trump phone call. That lawyer then passed those accusations to the White House and Justice Department, leading the CIA officer to become concerned and file a formal whistleblower complaint, the Times said. /kga