NEW YORK – The Trump administration wants to cap the number of refugees admitted into the United States to the lowest number since the resettlement program was created in 1980. 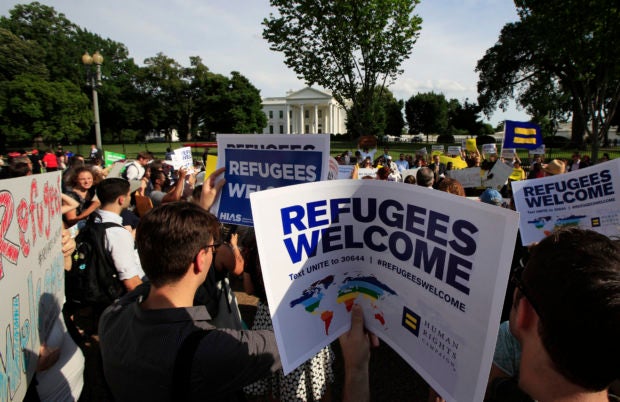 FILE – In this June 20, 2017 file photo, Refugees and community activists gather in front of the White House in Washington. The Trump administration wants to cap the number of refugees admitted into the United States to the lowest number since the resettlement program was created in 1980. A State Department proposal released Thursday would put a cap on the number of refugees at 18,000 for the fiscal year that starts Oct. 1. (AP Photo/Manuel Balce Ceneta)

A State Department proposal released Thursday would put a cap on the number of refugees at 18,000 for the fiscal year that starts Oct. 1. Of those refugee admissions spots, 5,000 would be set aside for persecuted religious minorities — an attempt to bolster President Donald Trump’s heightened focus on global religious freedom — and 1,500 would be set aside for nationals of Guatemala, Honduras and El Salvador, who are seeking asylum in the United States in far greater numbers.

Last year, the administration placed the cap at a record low of 30,000. The historically low limits have drawn protests from human rights groups as well as government officials.

“To cut the number of refugees the U.S. will accept to this low of a number reflects nothing more than this administration’s attempts to further hate, division and prejudice in a country that once valued dignity, equality and fairness,” said Ryan Mace, Grassroots Advocacy and Refugee Specialist at Amnesty International USA.

The group dismissed arguments that the U.S. lacks the capacity to adequately vet and settle refugees, calling this “a purely political decision.”

A senior Trump administration official described the proposed new designations for religious minorities and other groups of notable importance to U.S. strategic goals as a positive step forward.

The changes would connect refugee “admissions directly to U.S. national security and foreign policy priorities,” said the official, who was not authorized to discuss the issue by name and spoke to reporters on condition of anonymity.

Trump’s final decision on the cap must include consultation with Congress, which could push for a higher total.

The White House issued a separate order that requires added consultation with states and localities about settlement of refugees in specific areas. /gsg