DETROIT – General Motors now says striking workers will get company-paid health insurance, nine days after telling the union that coverage would be cut off. 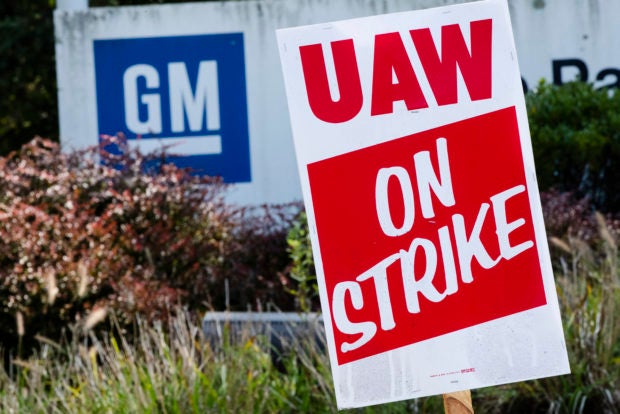 FILE – In this Sept. 23, 2019, file photo a sign is posted during a demonstration outside a General Motors facility in Langhorne, Pa. General Motors now says striking workers will get company-paid health insurance, nine days after saying coverage would be cut off. (AP Photo/Matt Rourke, File)

The automaker said in an emailed letter to the United Auto Workers dated Wednesday that employee health and well-being are GM’s top priorities.

The about-face came after workers howled and GM received withering criticism from politicians and on social media about cutting off the benefits.

“These irresponsible actions by General Motors are toying with the lives of hundreds of thousands of our UAW families,” UAW Vice President Terry Dittes wrote in a letter Thursday to Scott Sandefur, GM’s vice president of labor relations. Dittes wrote that public sentiment would “see these actions of GM as a shameful act!”

It wasn’t clear how the rhetoric or the health care spat would affect contract talks aimed at ending the strike by 49,000 workers that has shut down manufacturing for nearly two weeks at more than 30 GM plants across the nation.

“This is an attempt to do what’s right for our employees,” GM spokesman Dan Flores said.

It’s normal procedure in strikes for the cost of health care to shift from the company, which is largely self-insured, to the union. It says on the union website that the UAW will pick up the cost of the premiums. But the timing of when GM ends the health care and when the union takes over is at issue. The UAW said the benefits lapsed, but did not give a date.

Sandefur wrote in his letter that GM has chosen to work with health providers to keep benefits fully in place for workers “so they have no disruption to their medical care, including vision, prescription and dental coverage.”

Another GM plant, this time in Mexico, has been forced to close due to parts shortages caused by the strike, the company confirmed Thursday. An engine factory in Silao, Mexico, which employs 500 people, has closed, the company said, but pickup truck assembly and transmission plants at the same site remain open. Workers can take vacation time or they’ll get an unspecified portion of their pay, GM said. One plant and part of another have been closed in Canada.

Contract talks continued into Thursday night, a day after Dittes wrote a letter to members saying that committees had finished their work and the talks had moved to the main table of top bargainers, a sign of progress. Experts say the top bargainers would have to decide contentious economic issues such as wages, profit sharing, giving temporary workers a path to full-time jobs, products for plants GM wants to close and other issues that could take a lot of time.

On Detroit-area picket lines Thursday, workers said GM’s restoration of health care benefits makes them think that a contract agreement is near.

“That tells you we’re getting closer,” said worker Lee Harris, as he walked the picket line at an engine and transmission plant in the Detroit suburb of Romulus. /gsg