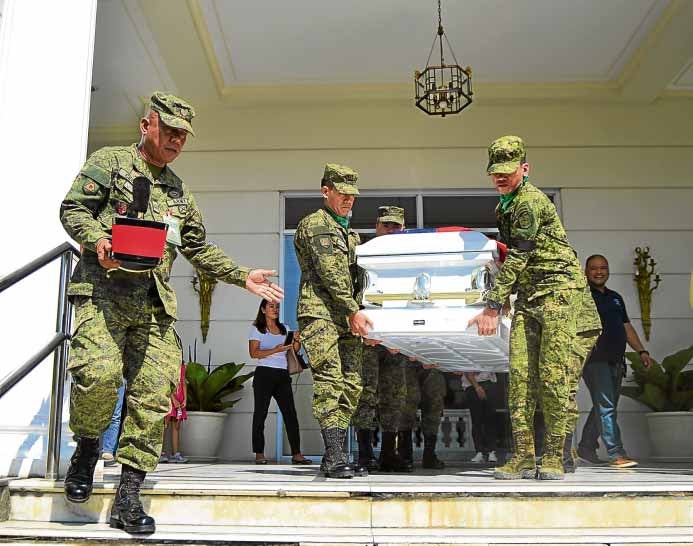 MILITARY HONORS Although still a cadet, Darwin Dormitorio was buried with military honors in Cagayan de Oro City on Wednesday morning. In photo above, soldiers from the Army’s 4th Infantry Division carry his coffin to the hearse that will take it to the Cagayan de Oro Gardens. —JIGGER J. JERUSALEM

BAGUIO CITY—A witness account that Cadet 4th Class Darwin Dormitorio was beaten up over misplaced boots will be the focus of a complaint the police are preparing against three Philippine Military Academy (PMA) upperclassmen for the death of the 20-year-old plebe.

Col. Allan Rae Co, Baguio City police chief, on Wednesday said two upperclassmen were directed to punish Dormitorio for failure to find a pair of boots that had been entrusted to him by another cadet.

Nine cadets were taken to the city prosecutor’s office on Tuesday to give sworn statements on the hazing of Dormitorio, who died at the PMA Station Hospital on Sept. 18.

A police autopsy showed that Dormotorio died from internal injuries caused by beating.

Citing the report at a news conference, Brig. Gen. Bartolome Bacarro, PMA commandant of cadets, said Imperial and Lumbag beat up Dormitorio on orders from Sanupao.

The three cadets have been ordered expelled.

If true, the beating could be considered excessive punishment.

Co, however, said on Wednesday that it would qualify as maltreatment, a violation of the antihazing law.

“Excessive punishment presupposes that the punishment is legal,” Co said. But when the “punishment being meted out is illegal, like punching and kicking, it’s maltreatment,” he said.

The police were gathering documents they would need to bring charges against the three upperclassmen over Dormitorio’s death.

Although he had resigned as PMA superintendent, Lt. Gen. Ronnie Evangelista said on Wednesday that he would sign the three cadets’ discharge papers once the charges were filed “or else they could go scot-free.”

The three cadets are detained at the PMA. They will be transferred to the Baguio police custody as soon as the complaint is filed.

In a message read for him by his wife, Jane, Interior Secretary Eduardo Año vowed that “there will be no whitewash, no sacred cows” in the investigation of Dormitorio’s death.

The PMA was represented at the funeral by Col. Claro Unson, the academy’s deputy dean for academics.

Speaking to reporters, Unson admitted that the PMA had failed to fully enforce the antihazing law.

“We are just very sorry. We have our shortcomings,” Unson said. “We did our best, but our best was not good enough.”

He said Dormitorio’s death would serve as the rallying point for the elimination of hazing in the academy.

Although still a cadet, Dormitorio was buried with military honors.

Soldiers from the Army’s 4th Infantry Division served as pallbearers at the funeral.

As his coffin was lowered into the grave, the troops fired a 21-gun salute, a final tribute to a young man who had aspired to become a soldier of his country. —With a report from Jigger J. Jerusalem