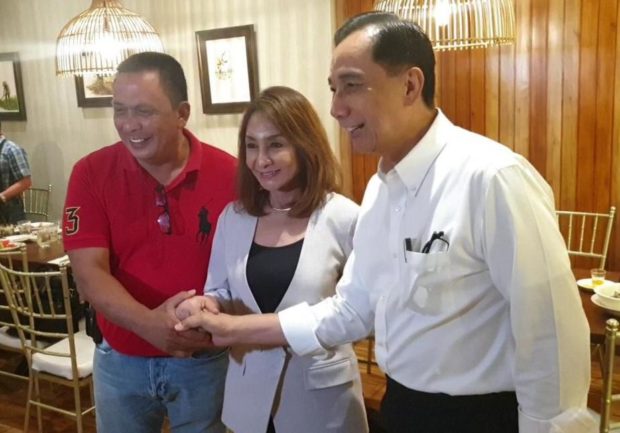 Dar, however, was all smiles after the two-hour meeting with Garcia at a hotel in Mandaue City, Cebu on Tuesday night.

He said he understood the reasons for Garcia’s executive order for a “pork ban” to protect the swine industry in Cebu.

The two were joined by Department of Agriculture in Central Visayas Director Salvador Diputado, representatives from the Central Visayas Pork Producers Cooperative, and Negros Oriental Gov. Roel Degamo, who also imposed a regulated entry of pork into his province.

Dar flew in to Cebu to meet with all the governors of Central Visayas.

Bohol Gov. Arthur Yap, who also imposed a total pork ban similar to Garcia, did not attend the meeting.

Diputado said Yap was attending to a visiting ambassador in Bohol and could not make it to the meeting.

Siquijor Gov. Zaldy Villa was also not in the meeting because of prior commitments.

“I already talked (with Garcia). We have understood each other. We’re all for the protection of the hog industry all over the country and we have agreed to share notes from time to time.

Everyone has to help each other,” said Dar when asked what happened to his appeal not to reconsider the restrictions in the pork industry trade.

Central Visayas Pork Producers Cooperative President Rolando Tambago welcomed the strong stance of the Cebu administration to continue imposing the ban on all pork products and live hogs from Luzon.

Tambago said they were happy that Dar understood the stand of Garcia in protecting their industry.

“We are now assured that our hog industry in Central Visayas are protected,” said Tambago.

Cebu is the largest pork-producing province in Central Visayas. It also ranked 4th in the entire country.

Data from the provincial agriculture showed that residents in Cebu yearly consume 61.6 million kilos of pork while tourists account for 1.8 million kilos mostly from Cebu lechon.

Last Friday, Dar issued a statement asking both Cebu and Bohol governors to “soften their hearts” and allow the food lines to flow freely–most particularly the transport and trade of ASF-free hogs, pork, pork products and processed food items–to and from Cebu and Bohol, and elsewhere in the Visayas, Luzon, and Mindanao.

But Garcia held on to her executive order to protect the interest of the Cebu hog industry despite the appeal of Dar. This was also the same stance of Bohol Governor Yap, a former Agriculture secretary himself.

A sudden dinner meeting was then called by Dar in Cebu last night for a dialogue with the governors. The officials feasted on pork viands, including Cebu’s chicharon and lechon.