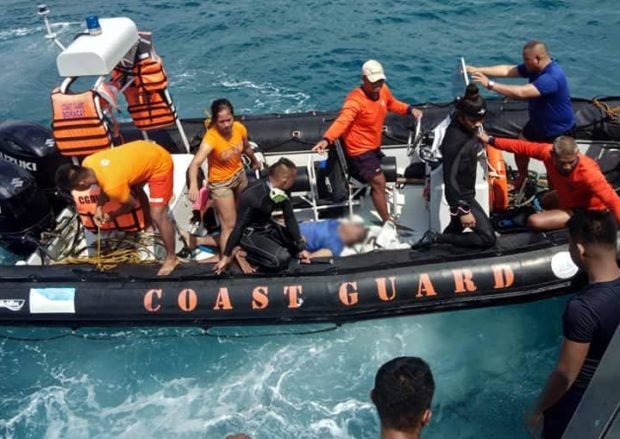 ILOILO CITY, Iloilo, Philippines — Seven members of Boracay’s dragon boat team died while 14 others were rescued when their boat sank off the waters of the resort island in Aklan province on Wednesday morning.

The dragon boat paddlers, all members of the Boracay Dragon Force team, were training for an international race, set for November in Kaohsiung City, Taiwan, when tragedy struck. They came from Bulabog beach at the eastern side of the island and on their way to the popular White Beach at the western side when their boat was hit by big waves.

Boracay Island in Malay, Aklan, is a popular venue for national and international dragon boat rowing competitions. Dragon boat racing is a popular sport in the Philippines and many parts of Asia, where 20 paddlers sit two abreast atop a long wooden 12-meter (39-foot) boat sandwiched by a cox who steers the vessel from the rear and a drummer in front.

A report from the public information unit of Malay town said the paddlers left Bulabog beach at 7:15 a.m. Their boat was battered by huge waves after it passed a reef and took in water some 300 meters off Sitio Lingganay in Barangay Manoc-Manoc.

The boat gradually sank, forcing the paddlers to hold on to the boat. Big waves, however, hit and dispersed them, according to the report.

In Manila, Capt. Arman Balilo, Philippine Coast Guard (PCG) spokesperson, said they were able to rescue 14 team members, all of whom were taken to Saint Gabriel Hospital for treatment.

According to Balilo, dragon boat paddlers do not carry life vests with them, especially while on practice, since they are “usually strong swimmers.

He said, unlike boats that ferry passengers, dragon boats are “not covered by the regulation on life vests.”

The Malay government and the PCG identified the fatalities as Mark Vincent Navarrete, Comar Arcob, Maricel Tan, Johann Tan, Richel Montoya, Antonette Supranes and John Vincent Natividad. They died while being taken to hospitals and clinics in Malay.

“There are many rocks in the area so it’s possible that they hit their head on them,” local disaster response officer Catherine Ong Fulgencio told Agence France-Presse (AFP) by telephone, explaining why they did not survive even though they could swim.

Malay Councilor Nenette Aguirre-Graf, herself a dragon boat paddler, said the victims were transferring to the White Beach as the norm during the change of season from “habagat” (southwest monsoon) to “amihan” (northeast monsoon).

Paddlers generally practice or compete in calm waters at the White Beach during the amihan season and in Bulabog during habagat.

The fatalities were Boracay residents and workers on the island’s resorts, hotels and restaurants.

“We are shocked and saddened. They were our friends,” Graf told the Inquirer.

The Philippine Dragon Boat Federation offered prayers for the victims of the tragedy, as it encouraged the promotion of and adherence to safety protocols.

“May peace and comfort find the hearts of the bereaved families of our departed brothers and sisters in this sport. May God’s healing and grace descend upon those who are recovering,” it said in a statement. —With reports from Jovic Yee and AFP