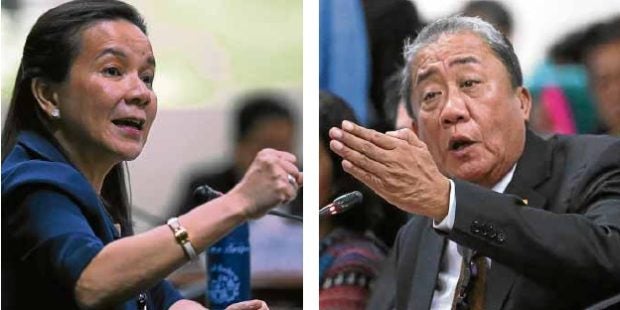 MANILA, Philippines — The Department of Transportation (DOTr) has informed a Senate panel that it is no longer seeking the grant of emergency powers to address Metro Manila’s traffic woes.

“We actually received a message from (DOTr) Secretary (Arthur) Tugade that he echoes that statement of the President that he will no longer seek for emergency powers,” DOTr Undersecretary for Road and Transport Infrastructure Mark de Leon was quoted as saying during a technical working group (TWG) meeting led by the Senate public services committee.

In a statement on Wednesday, committee chair Senator Grace Poe said De Leon made the pronouncement when lawyer Terry Ridon of Infrawatch PH convenor asked DOTr during the TWG meeting last Monday to clarify the agency’s position on its request for emergency powers.

During the committee’s hearing on the provincial bus ban last September 10, Poe and Tugade clashed over the need to grant President Rodrigo Duterte emergency powers.

Tugade stressed that such powers would help DOTr fast-track projects and policies to ease traffic in Metro Manila without fear of court injunctions.

However, Poe countered Tugade and said he should not put the blame on the lack of emergency powers.

For Poe, traffic problems in the metro remain unresolved because the government lacks a transport master plan.

Bills seeking to grant emergency powers to President Rodrigo Duterte were filed in the 17th Congress but have failed to prosper in the Senate amid questions on its effectivity to address metro’s gridlock.

In the current 18th Congress, at least three bills granting emergency powers to Duterte have been filed in the House of Representatives while Senator Fancis Tolentino filed a similar bill in the upper chamber.

While the DOTr has already withdrew its bid to push for the grant of emergency powers, Poe said bills aiming to address the country’s traffic problems will still be tackled.

(Emergency powers can still be granted, it will not be called as such but it will still be a consolidation of what the DOTr needs.)

Poe also said the DOTr has yet to submit to the committee a comprehensive transportation plan.

(They said they have already crafted it but they submitted it first to NEDA which will then be submitted to us. So, we have yet to receive it.)

(We’re working with the DOTr and the MMDA (Metropolitan Manila Development Authority to find a solution. Emergency powers is just a term, The traffic plan is what’s important.)

Poe, during Monday’s TWG meeting, stressed that before any measure on addressing traffic can be passed into law, the government should have concrete plans in place first.

(We need a concrete plan that has timeline and deadlines. There must be a list of projects and corresponding funds for it. And that list must be open to public scrutiny.)

The senator also said she looks forward to the inputs of the resource persons during the TWG in crafting a bill that will fix the traffic mess in mega Manila.

“Not everything is legislated. At times, you just need to bring people together… It might not be emergency powers, it can be just a traffic solution,” she pointed out.

Poe said another TWG meeting on the government’s transportation roadmap to address the traffic crisis in the National Capital Region is scheduled on October 2. /kga/muf