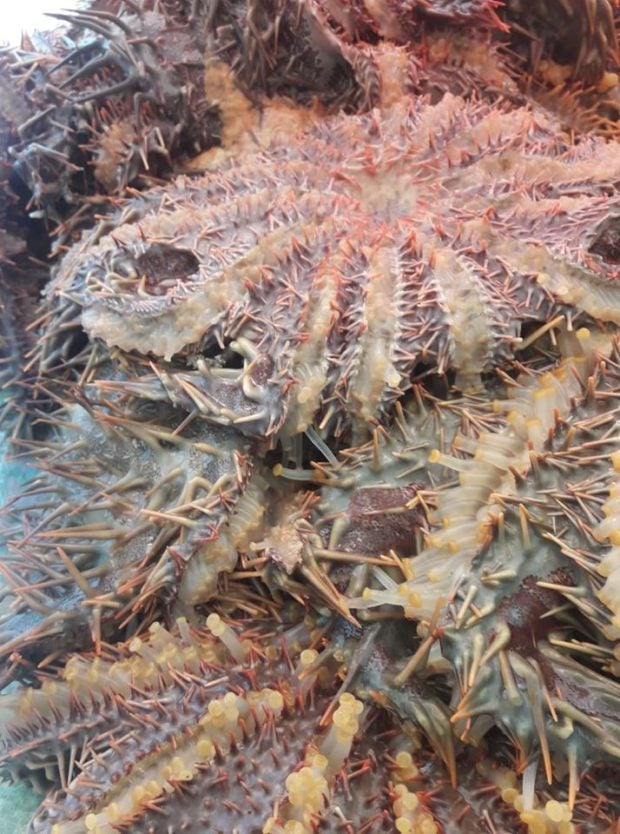 TACLOBAN CITY –– An outbreak of the poisonous crown-of-thorns starfish (COTS) has been reported in the sea off at least five towns in Southern Leyte.

Armando Gaviola of the Provincial Environment and Natural Resources Management Office said the “massive infestation” of the crown-of-thorns (COTS) is “very alarming” as these parasites destroy coral reefs.

“Supposedly, in a hectare of a coral reef, we could see four to five crown-of-thorns. But now, there are even crown-of-thorns of close to a hundred per hectare seen in some coral reefs,” he said.

A class of starfish that becomes pests if its reproduction is not controlled, COTS destroys the habitat of fish and other marine animals.

It has venomous sharp spines that look like a crown. COTS is one of the largest kinds of starfish and can reach up to 20 inches in diameter. It preys on hard or branching corals.

COTS are also dangerous to humans. Its prick causes stinging pain, bleeding, nausea and swelling, which may last a week.

Gaviola could not say how many coral reefs have been affected by the presence of COTS in terms of hectares.

But he said their numbers are overwhelming.

The presence of this kind of starfish, he said, was first noticed in the sea off the towns of Malitbog, Padre Burgos, Libangon, Liloan, and Limasawa as early as May.

To eliminate the COTS, Gaviola said they have conducted some extraction and collection of these starfish and buried them by using a specialized ‘gun’ injected with a lime solution to kill them.

“We have no idea yet as to the reason why there is a surge of crown-of-thorns affecting our coral reefs. Perhaps, it could be due to climatic condition, or they were brought by the current,” he said.

Gaviola added that these COTS should be eliminated to save the corals.

“We are alarmed by the presence of these crown-of-thorns in our seas because they are killing our corals, even the hard ones, which serves as the breeding grounds of our fishes,” he said.

Also, the destruction of Southern Leyte’s coral reefs by the COTS would affect the tourism industry of the province which is known to have one of the best diving sites in the country. /lzb