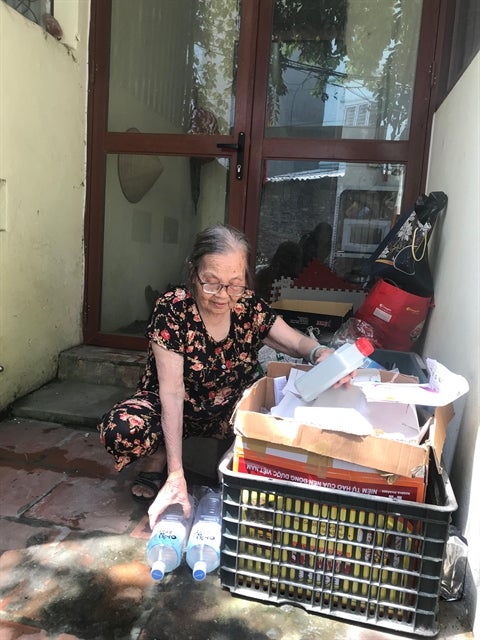 HANOI — She may be 87 years old, but Bui Thi Thinh is showing no signs of slowing down.

In fact, this grandmother of eight is a woman on a mission – to rid the planet of plastic waste creating a better world for future generations.

“I hope that more and people will join us in this effort. I believe together we can make a major change.”

From her small one-storey house in Hanoi’s Ha Dong District, Thinh co-ordinates a team of helpers who scour the streets salvaging anything they can recycle.

Her efforts fall under the umbrella of the Women’s Union, and Thinh is more than happy to set a good example for others to follow.

She has even enlisted the help of the neighborhood’s younger generation – and has her own Facebook profile to post and live stream her efforts.

She said: “Children usually come to my house, asking me to give them bags so they can collect trash that can be recycled.”

Thinh’s friends all share her ideals and as the old saying goes, one man’s trash is another man’s treasure.

The items collected are sold on, and cash raised is used to make soup to give to patients at the National Cancer Hospital’s branch in Tan Trieu Commune, Thanh Tri District.

She added: “The trash collection has been implemented in Phuc La Ward where I lived two years ago. The purpose of the activity is to have money to provide free soup for poor patients.”

“Women are the ones who throw away rubbish in the family. The trash collection movement is not only for humanity but also a way to recycle waste.”

“At first not many people responded to the movement,” she said.

”People think rubbish can’t bring about much money but a residential group could collect VND30 million (US$1,290) a year. It was quite a big surprise.”

The money collected from selling trash will be spent on charity programmes as well as purchasing hand baskets and glass bottles to give to members who are active in waste collection and environmental protection.

According to Huong, scrap collection is a renovation of the movement of exchanging scrap for green products. It is organised once a month instead of twice a year as was in the past.

Local women will bring their belongings that are no longer in use to a certain gathering point.

“Some sub-unions do the gathering of garbage once a week – on Saturday morning, and they usually collect between VND500,000 – VND1 million each time.”

Now the movement has proved to be successful as most people in the locality are involved, Huong said.

“You can see that every hair salon in Phuc La Ward has a bag for keeping used shampoo bottles. If you ask them what it is for, they’ll say that they gather to hand in to the women’s union,” she said.

The scrap collection movement was conducted following late President Ho Chi Minh’s practice of thrift – that is saving from the smallest things, Huong said.  It also enhanced the awareness on environmental protection of both the elderly and children.

As children often followed their grandmothers’ example, the movement would help set up a good habit for them from childhood, she said.

After doing morning exercises, they clean up the surrounding environment, collecting rubbish and then start classifying wastes at the gathering point.

“We long for Saturday so that we can take part in the event,” Nguyen Thi Tuan, a member of the group, adding that most of the participants are retired employees who want to do something for society.

She said this is a very practical programme to clean up the environment, spreading the solidarity and mutual affection in families.

Tuan said the key to the success of the programme is the involvement of the elderly – because younger people see their elders taking action and learning from them.

“It is difficult to meet younger people because many have busy lives, the advocacy should start with the elderly who will spread the information to other members in their family,” she said.

But the secret of future success, and a better, greener environment, will always ultimately fall on the shoulders of the next generation.

Tuan also said to ensure the efficiency and sustainability of the movement, children should be educated on environmental protection from a very young age.

But as 87-year-old Bui Thi Thinh proves beyond doubt, you are never too old to learn.