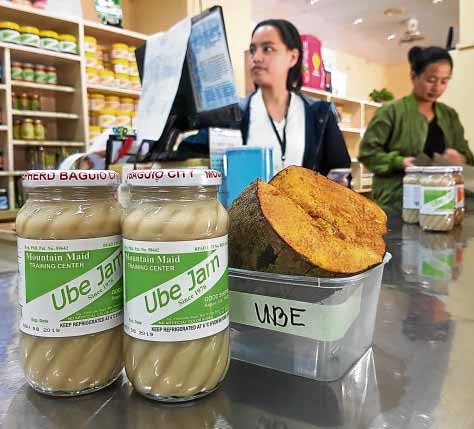 The delicious jam is now white, sometimes yellowish white, because the Good Shepherd Convent here where it is made is running out of ube due to a supply shortage in the Cordillera region.

“Due to changing climate, our ube farmers are having difficulty growing ube,” the Religious of the Good Shepherd congregation, which runs the convent, said in a post on Facebook on Monday.

“It has been our struggle in the recent years to find a stable supply. And in the past weeks there [was] none,” the congregation said.

The white jam, however, is “just as good as the purple one,” it said.

Leonila Yagyagan, who works at the congregation’s store, said the supply of white yam came in just last week.

“We didn’t have jam, purple or white, for more than a month since Aug. 2,” Yagyagan said.

Although the period from July to September is off season for purple yam, this is the first time the congregation has faced a shortage of this scale, Yagyagan said.

Last year, she said, the Good Shepherd Convent produced white jam together with the usual purple jam to introduce a new jam.

But this year, the convent has been forced to make only white jam because of the ube shortage, she said.

Harold Kailaw and his friends from General Santos City came to Baguio to buy Good Shepherd ube jam, and they were surprised to find only white jam.

At P230 per 440 gram bottle, the white jam is costlier than the purple jam, which usually goes for P210 a bottle of the same size.

“The seller said it tastes the same so we’re going to try it,” Kailaw said.

Sister Guadalupe Bautista, product developer at the convent, said the ube vines dried up in the El Niño heat.

“White yam, which is wild, survived, and this is the only available variety. Next month, the farmers may be able to deliver purple yam,” she said.

The goods are made by students who undergo livelihood training in the convent, which runs a social enterprise that helps young people in the Cordillera get a college education.

According to Cameron Odsey, Department of Agriculture director for the Cordillera, a lack of planting materials caused by the small number of farmers who produce quality seeds is the reason for the ube shortage in the region.

Few farmers produce ube seeds because these are susceptible to pest and disease, he said. —With a report from Vincent Cabreza