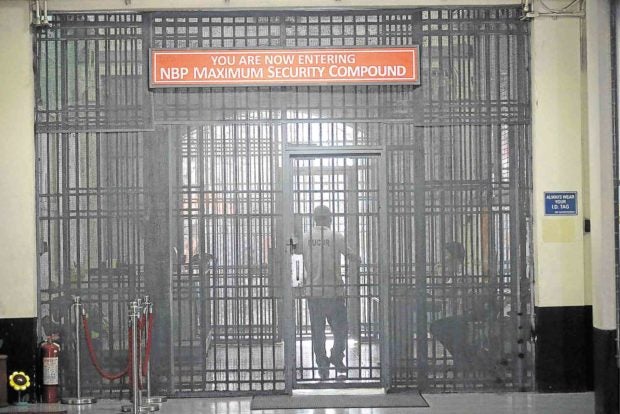 Bureau of Corrections personnel guard the gate leading to the maximum security compound of the national penitentiary in Muntinlupa. GRIG C. MONTEGRANDE

MANILA, Philippines — The Bureau of Corrections (BuCor) will start releasing inmates who complied with President Rodrigo Duterte’s call for surrender, but only those whose releases are not related to the erroneous application of Good Conduct Time Allowance (GCTA), Justice Undersecretary Markk Perete said.

“They [the releases of surrendered inmates] will be made even before the completion of the cleaned-up list,” Perete said Monday.

The BuCor is currently polishing up the list it has submitted to the Senate, Department of Justice (DOJ), Department of Interior and Local Government (DILG) and Philippine National Police (PNP).

Based on the list, there are 200 persons deprived of liberty (PDLs) released after the Supreme Court declared that the implementation of the Extended GCTA law should be retroactive. The list also showed that 445 heinous crimes PDLs have been released by the previous administration beginning 2014 while 1,714 heinous crimes PDLs have been released from the start of the Duterte administration.

The list, however, does not only contain inmates that benefitted from the GCTA but other inmates released because there were acquitted by the courts, have been granted parole, or received conditional pardon from the President himself.

Perete said members of the DOJ-BuCor Task Force are currently at the Senate and checking the carpetas [records] of the PDLs as part of the verification process.

“They will work there until we complete the process,” Perete said. /je