NEW YORK – A strike against General Motors by 49,000 auto workers appears headed to an eighth day.

The workers left their jobs early Monday after their four-year contract with the company expired. 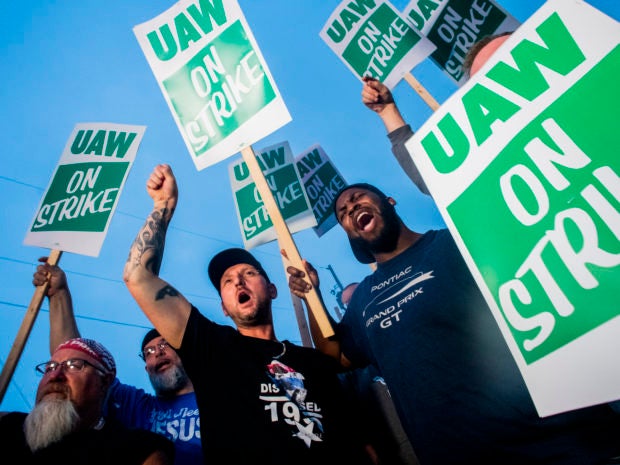 General Motors employees Bobby Caughel, left, and Flint resident James Crump, shout out as they protest with other GM employees, United Auto Workers members and labor supporters outside of the Flint Assembly Plant on Monday, Sept. 16, 2019 in Flint, Mich. Thousands of members of the United Auto Workers walked off General Motors factory floors or set up picket lines early Monday as contract talks with the company deteriorated into a strike. (Jake May/The Flint Journal via AP)

They’re seeking a bigger slice of GM’s profits, products to manufacture at plants GM wants to close, a path to permanent jobs for temporary workers and other items.

GM wants to lower its labor costs so they’re closer to the compensation for workers at U.S. factories owned by foreign automakers. Most UAW production workers make about $30 per hour. GM’s labor cost including benefits is $63 per hour while the foreign companies pay about $50, according to the Center for Automotive Research, an industry think tank.

Democrats have been quick to back United Auto Workers in their strike against General Motors, a union they long have aligned with politically. The Republican response has been muted.

“GM is demonstrating that it has no loyalty to workers in America …. Their only loyalty is to their bottom line, and if they can save a nickel by moving jobs to Mexico or to Asia or anywhere else on this planet, they will do it,” Warren said.

The strike is playing out as a federal corruption investigation against top UAW officials widens. The FBI raided UAW President Gary Jones’ suburban Detroit home last month and prosecutors have charged 11 people in the investigation so far, leading many of the 49,000 workers nationwide to question whether leaders have their backs. /gsg