90,000 public school students to be given two pairs each as cases rise in city
By: Dexter Cabalza - Reporter / @dexcabalzaINQ
Philippine Daily Inquirer / 03:18 AM September 23, 2019 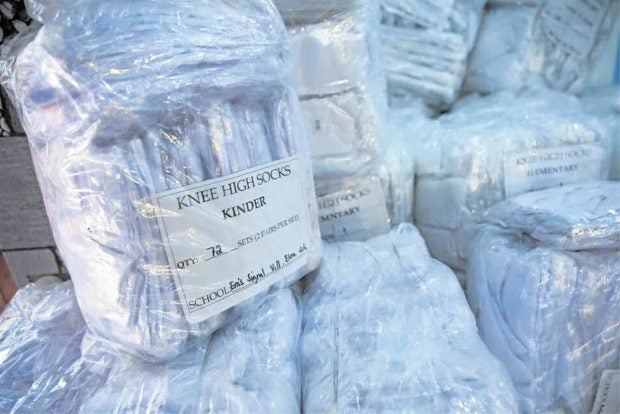 101-PERCENT INCREASE From January to August, the city has recorded 490 dengue cases, a hike of 101 percent from last year.

MANILA, Philippines — After seeing dengue cases in the city rise by over 100 percent this year, the Taguig local government has introduced a way to combat the mosquito-borne disease: knee-high socks.

In a statement, the Taguig City government said that it would be distributing the foot apparel to around 90,000 of its 145,000 public school students this month.

The first beneficiaries were 4,375 students of EM’s Signal Village Elementary School who each got two pairs on Sept. 18 in a ceremony held by the city health office and local school board.

This is the first time the city government is distributing socks to public school students. Taguig’s “Balik Eskwela” school supplies include a pair of black shoes, but not the foot apparel.

Public school students (both male and female) in day care, kindergarten and Grades 1 up to 3 will get two pairs each.

According to City Hall, the project was in line with self-protective measures under the “4S” antidengue strategy. The other three are search and destroy mosquito breeding places, seek early consultation on the first signs and symptoms of the disease, and say yes to fogging if there is an impending outbreak. 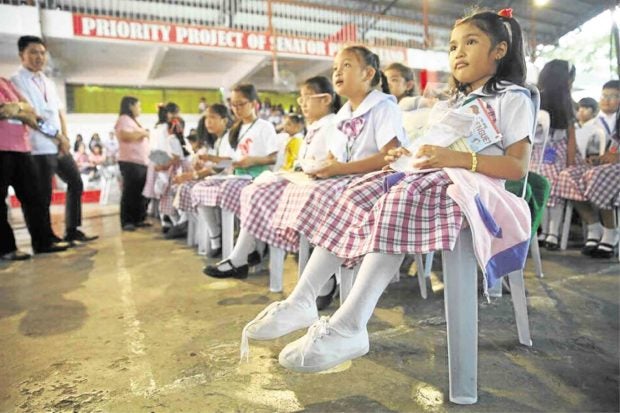 ANTIMOSQUITO APPAREL Students of EM’s Signal Village Elementary School each get two pairs of knee-high socks as the Taguig government seeks to prevent the spread of dengue in the city.—PHOTOS FROM TAGUIG PIO

Based on data from the Department of Health (DOH), the number of dengue cases in Taguig City in the first eight months of the year doubled from the same period in 2018.

From January to August this year, the city recorded 490 dengue cases, up by over 101 percent from the 243 cases in 2018. Two deaths have so far been reported this year.

The total number of cases has reached 10,349 with 45 deaths across Metro Manila as of August, it added.