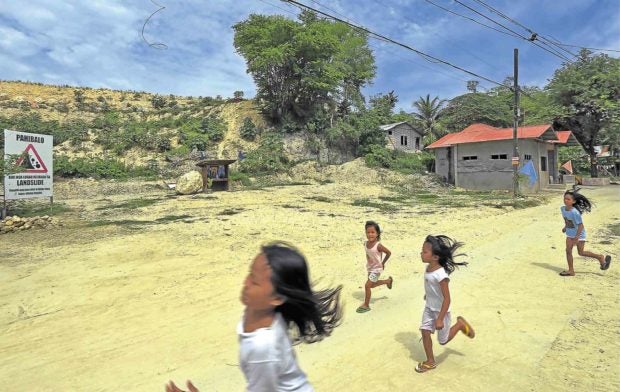 A year of memories flooded back to residents of Barangay Tinaan in Naga City, who lost 78 neighbors when a massive landslide buried homes on Sept. 28, 2018. Children residing in Sitio Sindulan have managed to move on from that tragedy which will be remembered this week. —JOWENCE NIÑA MENDOZA/CONTRIBUTOR

NAGA CITY, Cebu — There are times when Narciso Siton could barely sleep. “I could still vividly recall what happened. I was a witness to it,” he said in Cebuano.

Although a year had passed, the 50-year-old fruit vendor could not forget what happened on the morning of Sept. 28 when more than 2 hectares of land covered more than 50 houses, killed 78 people and displaced 1,947 families or 8,091 people.

He was preparing breakfast in their house at Sitio Sindulan in Barangay Tinaan here when he felt the earth shake before 6 a.m.

What followed was a nightmare: A portion of the mountain collapsed and rushed down into houses below.

“I saw the mountain collapsed and covered members of my family,” said Siton, who survived with his two other children age 18 and 12.

While he still mourns for the loss of his family members, nothing much has happened for the victims a year after the killer landslide. The city has yet to complete the relocation site for the 213 of the 418 families who were removed from the permanent danger zone.

They would be beneficiaries of the 50 houses that would be built by the Naga City government and 192 houses from the National Housing Authority and the Housing and Land Use Regulatory Board on a property donated by Cebu province in Barangay Tinaan.

The rest of the 205 families opted to avail themselves of the P150,000 assistance from the city government so they could look for a place where they could build their houses.

The Mines and Geosciences Bureau in Central Visayas (MGB-7) was still removing loose materials to stabilize the slope affected by landslide.

“We have been successful [in stabilizing the slope]. We’re not totally done yet but the situation in the area is much better now.”

Armando Malicse, chief of the MGB-7 Mine Safety, Environment and Social Development Division, said a hazard reduction plan was being implemented at the ground zero to stabilize the slope affected by the landslide.

The court is still hearing the P4.5-billion lawsuit filed by Naga City residents against private and public entities believed responsible for the landslide.

Sued were Cemex Holdings Philippines Inc. and its subsidiaries, Apo Land and Quarry Corp. (ALQC) and Apo Cement Corp.; the MGB in Central Visayas; and the governments of Naga City and Cebu province.

The lawsuit is asking Cemex, ALQC and Apo Cement to pay the landslide victims P4 billion in damages and P500 million in rehabilitation fund for the landslide area at Barangay Tinaan in Naga.

City residents believed the quarry operations of Cemex and its subsidiaries were to be blamed for the landslide.

ALQC has stopped operations since the landslide in September 2018 on orders of Environment Secretary Roy Cimatu and the Naga City government.

ALQC, however, was tasked by the MGB central office and the Department of Environment and Natural Resources to implement the hazard reduction plan in the landslide site by hauling loose debris to build infrastructure to protect the community from possibilities of further erosion.

Malicse said the local governments and people should learn from the lessons of the landslide, noting that tragedies could be avoided if laws and regulations were followed.

“Never let anyone live on public lands,” he said. 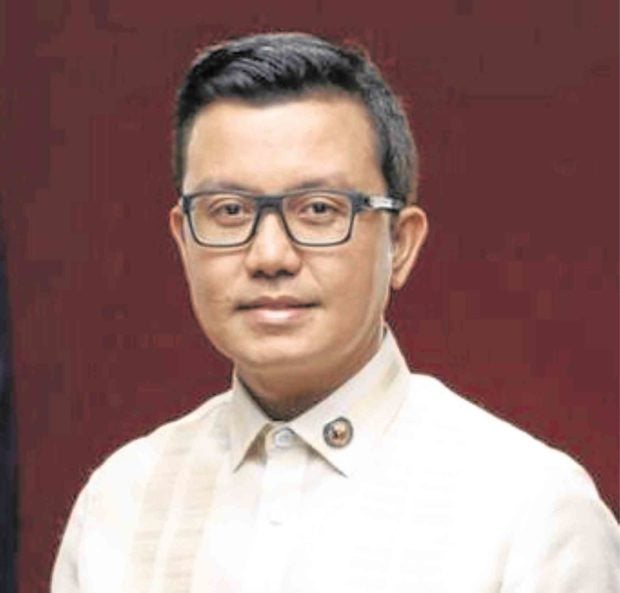 As a matter of transparency and accountability, we would ask General Albayalde to submit a report on where money was used Alfredo Garbin Jr.
Ako Bicol party list representative

He, however, admitted that at least 70 percent of Naga’s land area is public land or those which have not been titled or are outside the commerce of man.

“Dwelling on public land is risky. But we can’t totally blame local governments because people build their houses on public land without knowing the risks it entails,” he said.

Recognizing that the city has several danger or red zones which are prone to landslides and should be off-limits to people, the local government is drafting a master plan as part of its disaster preparedness program.

Part of its disaster preparedness after the landslide was to tap the University of Philippines’ Resilience Institute to revise its comprehensive land use plan.

Chiong said they also launched a greening program which would focus on planting and nurturing of narra trees, the official city tree, and the planting and propagation of bamboos in disaster-prone areas to lessen landslide.

“We have to really prepare for disasters such as this,” she said.