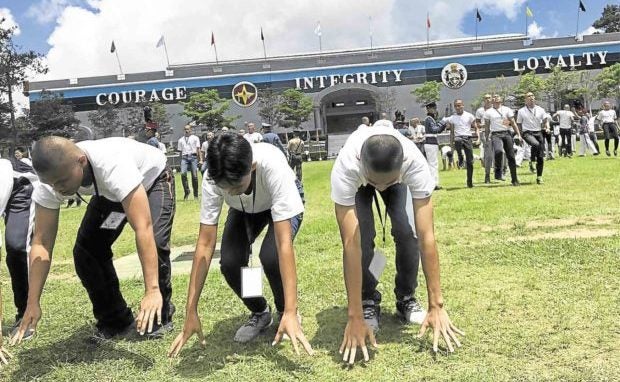 PLEBEIAN WELCOME Members of the Philippine Military Academy Class of 2023 are welcomed by their upperclassmen after setting foot in the academy in June. Slain cadet Darwin Dormitorio was among this group. —Vincent Cabreza

CAGAYAN DE ORO CITY, Misamis Oriental, Philippines — The Dormitorio family has chosen privacy as they grieve over the death of its member, Darwin, a Philippine Military Academy (PMA) plebe who died of hazing last Sept. 18.

But on Saturday, as the flag-draped casket bearing his remains was laid at the Cosmopolitan Funeral Homes here, several family members poured out their sentiments.

They asked officials of the country’s premier military school to let Darwin be the last victim of an unwritten and unspoken time-old tradition of plebe initiation, which claimed the 20-year old’s life.

“It’s not good to know that cadets who are willing to serve our country die during their training,” said Darwin’s uncle, Mayor Omaradji Pizarro of Kalilangan, Bukidnon.

“What we demand to know is why these upperclassmen are so sadistic, barbaric, very cruel, when in fact, they [cadets] will soon be their comrades,” Pizarro added.

According to him, the Dormitorio family would welcome any move that would totally eradicate the culture of hazing at the PMA.

“We hope this would be the start of reform at the PMA but sadly at the expense of Darwin’s life,” Pizarro said.

He said the academy must do away with the cycle of cruelty and violence being perpetrated by upperclassmen on the plebes.

“We are creating leaders, and if they are trained to be cruel, they will become cruel leaders someday,” Pizarro said.

Pizarro also pointed to the need to review the anti-hazing law so that similar incidents could be prevented.

The new law provides stricter penalties for hazing perpetrators and also punishes those who cover up the crime.

On Saturday, Cagayan de Oro Rep. Rufus Rodriguez said he had already filed a resolution calling for a House probe into Dormitorio’s death.

On Friday, Dormitorio’s teachers and classmates attended a Mass offered for him in Xavier University where he completed senior high school.

“We are all very saddened by the tragic death of PMA cadet Dormitorio, a promising local boy from Cagayan de Oro City, whose dreams were shattered needlessly. We mourn with the bereaved family and relatives,” said Mayor Oscar Moreno.

“We urge the authorities to thoroughly investigate the death and to leave no stone unturned,” Moreno added.

Moreno also demanded that justice should be served against the suspects in the hazing of Dormitorio.

Misamis Oriental Gov. Yevgeny Vincente Emano lamented on Saturday how Dormitorio’s death ended the life of an individual “whose ambition in life is to become productive, useful and helpful to our country.”

“I believe that Darwin joined the academy to be molded and trained military discipline and not to die a tragic death,” Emano said.

“He could have achieved a better future for him and his family and could be one of those who would offer their lives out of love for our country,” Emano added.