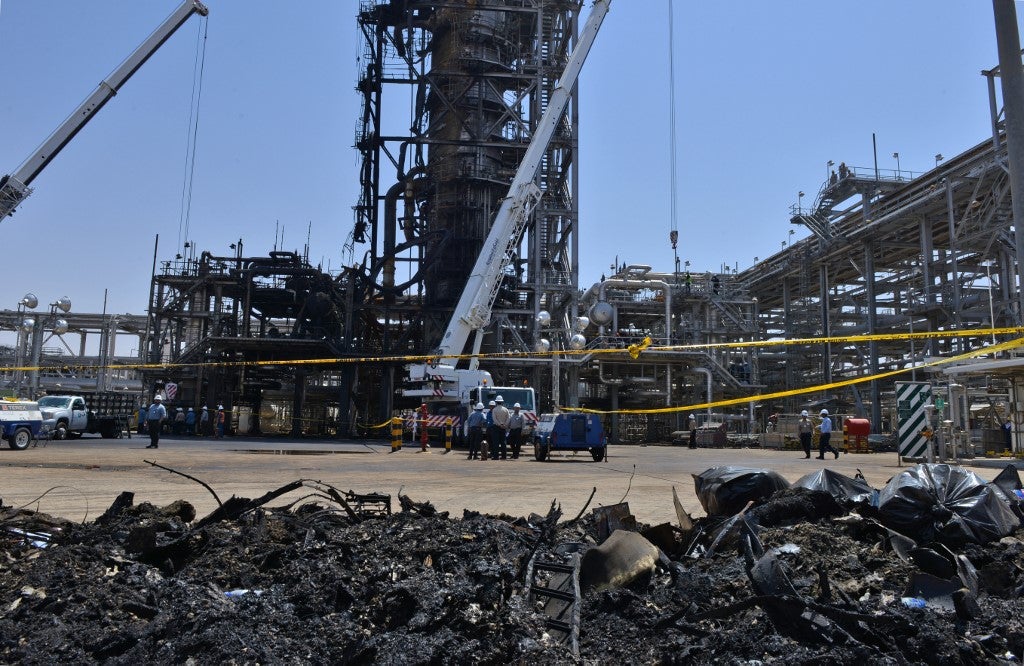 A destroyed installation in Saudi Arabia’s Khurais oil processing plant is pictured on September 20, 2019. – Saudi Arabia said on September 17 its oil output will return to normal by the end of September, seeking to soothe rattled energy markets after attacks on two instillations that slashed its production by half.  (Photo by Fayez Nureldine / AFP)

NEW YORK — The past week’s sudden surge in oil prices brought to mind the nightmare of shortages, but it’s not too likely motorists will be queueing to fill up around the world, analysts say.

All it took was a September 14 strike on key oil infrastructure in Saudi Arabia to abruptly leave the world’s main supplier producing just half its normal amount.

That sent the price of Brent crude flying 15 percent higher in a single day.

The price on a barrel of crude has come back down since then and by Friday was trading around $65.

Given the slowdown in the global economy and the abundance of crude produced worldwide, the prospect of a $100 barrel, for now, doesn’t look too likely.

“In essence, the world is far better equipped to handle oil shocks than it was in the ’70s,” explained Harry Tchilinguirian, the head of commodity research at BNP Paribas.

In 1973, after an embargo by the Organization of the Petroleum Exporting Countries (OPEC) against Israel’s allies in the midst of the Yom Kippur War, and in 1979, after the Iranian revolution, crude oil prices soared in just a few months, bringing developed economies to their knees.

“Currently, an oil shock would hardly have the same devastating effects” because countries grew accustomed to such events, economists at Commerzbank said in a note.

On top of that, “central banks would not react to a supply shock with massive interest rate hikes to combat rising inflation,” they said.

Most importantly, however, economies have reduced their dependence on oil.

Consumption in the United States, for example, rose from 17.3 million barrels per day (mbd) in 1973 to 20.5 mbd in 2018, an increase of only 18 percent even as the country’s real gross domestic product jumped 230 percent.

In Germany, households spent only 2.6 percent of their budget on fuel in 2018.

Many economies have taken strides away from heavy oil consumption, thanks to transport and energy-efficient industries, and alternative sources such as natural gas or renewable energy.

When oil prices held well above $100 a barrel between 2011 and 2014, it did not lead to economic collapse. The world has also now become less dependent on a few huge producers.

The first oil crisis led to the creation in 1974 of the International Energy Agency, which requires OECD countries to keep in reserve the equivalent of at least 90 days of their net imports of crude.

On top of that, oil production has branched far beyond the Middle East, said Tchilinguirian, referring to North Sea oil exploited since the 1980s, deep-sea exploitation off the coast of West Africa and Brazil, and the oil sands of Canada.

The United States, long deeply dependent upon imports, has become a major producer and exporter thanks to shale oil and new technologies.

Such factors help smooth things out in the event of a major disruption like the attack on Saudi facilities.

As such, a country like Saudi Arabia would probably no longer decide to voluntarily suspend its exports “because it could lose its status as a reliable supplier,” says Alan Gelder, refined products specialist for Wood Mackenzie.

Even if an oil shock is unlikely, “you can never say there is zero risk,” said Andrew Lebow, oil market specialist for Commodity Research Group.

“Especially,” he added “if there is a major war that closes the Strait of Hormuz,” which a third of all petroleum products shipped by sea pass through.

The effects of a possible oil shock, however, “should not be underestimated,” the Commerzbank economists warned.

“Many economies are currently struggling with problems anyway and the central banks have little room for maneuver (…) to help the affected economies,” they said.