Hundreds of women in Ecuador protest after abortion ruling 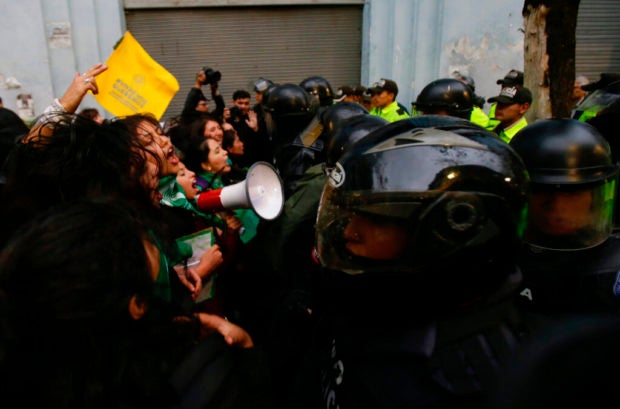 Women confront the police during a demonstration near the government palace after the refusal of the Ecuadorian Assembly to approve the decriminalization of abortion in cases of rape and incest in Quito, Ecuador, Friday, Sept. 20, 2019. (AP)

QUITO, Ecuador — Hundreds of women have angrily protested in Ecuador’s capital after the congress rejected a measure that would allow abortions in all cases of rape.

Some demonstrators on Friday pushed against the plastic shields of police, who used pepper spray to disperse people in the crowd near the government headquarters in Quito.

One of the signs at the demonstration read: “Motherhood by choice and not by rape.”

The protesters hope Ecuadorian President Lenin Moreno will veto the decision by the congress, which fell short of the 70 votes needed for the measure to pass.

Currently, abortion is legal in Ecuador if the mother’s life is in danger or in cases involving the rape of a woman with a mental disability.