History buff finds ships that sank in 1878 in Lake Michigan 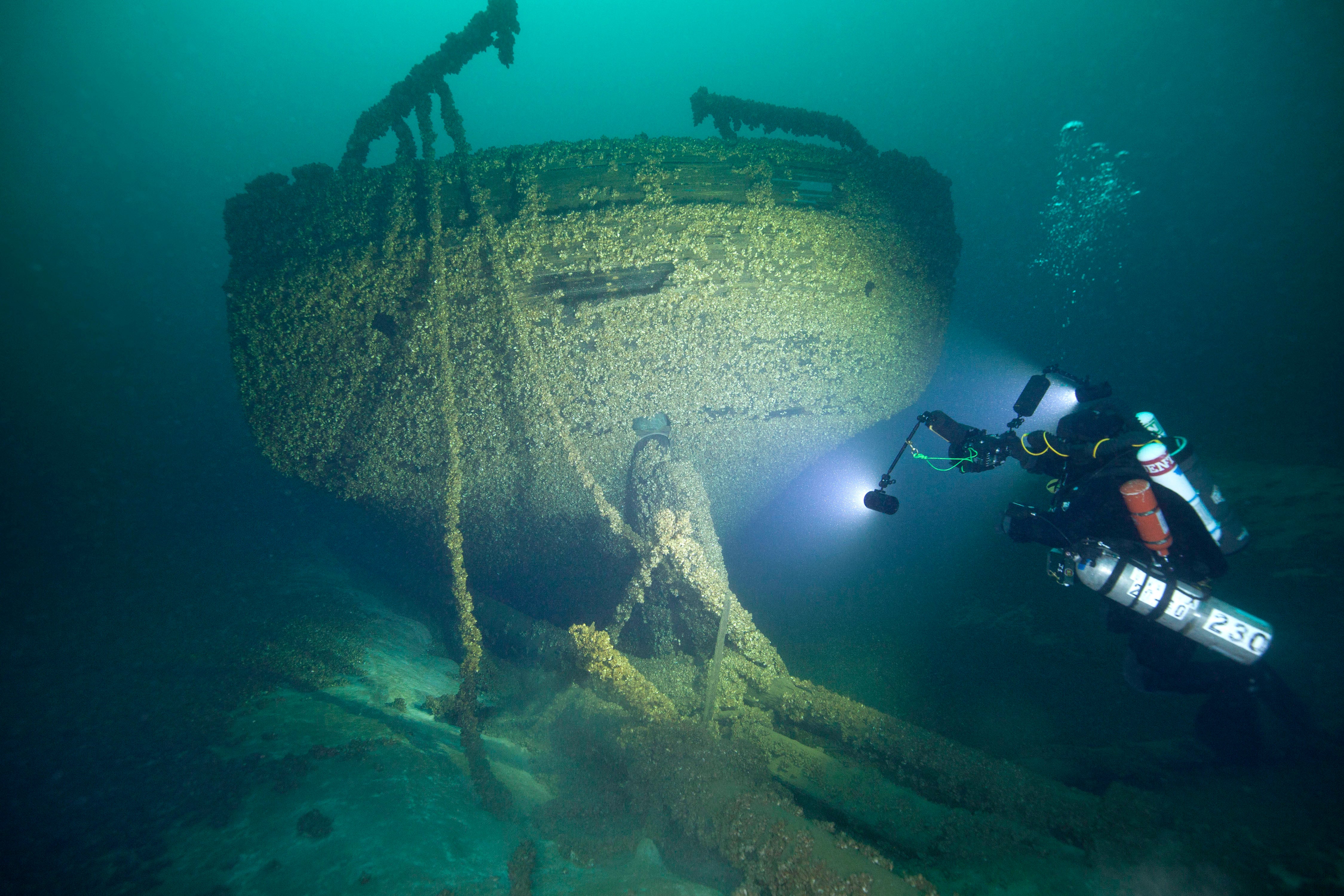 In this Aug. 24, 2019, photo provided by John Janzen, diver John Scoles maneuvers around the wreckage of the schooners Peshtigo and St. Andrews, lost in 1878 near Beaver Island in northern Lake Michigan. A group of maritime history enthusiasts led by Boyne City, Michigan diver and explorer, Bernie Hellstrom have announced the discovery of the schooners. The site was located in 2010 by Hellstrom during one of his many trips to explore the Beaver Island archipelago. (John Janzen via AP)

DETROIT — A diver and maritime history buff has found two schooners that collided and sank into the cold depths of northern Lake Michigan more than 140 years ago.

Bernie Hellstrom, of Boyne City, Michigan, said he was looking for shipwrecks about 10 years ago when a depth sounder on his boat noted a large obstruction about 200 feet (60 meters) down on the lake bottom near Beaver Island.

“I’ve made hundreds of trips to Beaver Island and every trip I go out the sounder is on,” he told The Associated Press on Friday. “But if you happen to see something that’s not normal, you go back. A lot are nothing but fish schools. This was 400 feet of boat. There’s nothing out there that big that’s missing.”

He returned to the area in June with a custom-made camera system and discovered the Peshtigo and St. Andrews about 10 feet (3 meters) apart with their masts atop one another. The hull of one of the ships has a huge gash.

It had been believed the ships sank in 1878 farther to the east in the Straits of Mackinac in Lake Huron. But only one ship could be found and that was thought to be the St. Andrews.

Baillod said he searched through old news reports and learned that the Peshtigo and St. Andrews did hit each other and sink between Beaver and Fox islands, northwest of Charlevoix, Michigan.

Two of the Peshtigo’s crewmen were lost. Survivors from both ships were rescued by another passing schooner, according to Baillod.

“You can argue that any new discovery is important because it really gives you a first-time look at something that has been lost and missing for such a long time,” Lusardi said.

He added that the Peshtigo and St. Andrews “had been mistakenly identified as two vessels up in the Straits for decades.”

“Now, it begs the question: What are those wrecks?” he said.

An estimated 6,000 shipwrecks sit on the bottoms of the Great Lakes, according to Cathy Green, executive director of the Wisconsin Maritime Museum in Manitowoc.

“If you think about it, cities like Chicago, Detroit and Milwaukee would never have been able to develop without the water highway,” Green said. “When material remains of that history is found, it’s a big deal to historians and archeologists.”  /muf

Read Next
Revelers reach gates of Area 51 then peacefully rejoin party
EDITORS' PICK
IATF to LGUs: Issue ordinances vs attacks on frontliners, COVID-19 patients
10 Filipinos positive for COVID-19 in UK, 7 in Ireland — envoy
Nograles: Cabinet members to donate 75% of monthly salary to aid COVID-19 fight
Diokno to Duterte: OK to make fun of buck tooth, but focus on people’s needs first
Robredo spox thanks Duterte for defending VP’s efforts vs COVID-19
Quick chat with Nicole Andersson: ‘You really don’t need much to be happy’
MOST READ
Coronavirus hotbed Rizal to shut borders on April 6
Gov’t mulling quarantine period extension of 15-20 more days
ADB warns PH against prolonged lockdown
Sotto on Isko Moreno’s call: We do our job without the media following our every move
Don't miss out on the latest news and information.