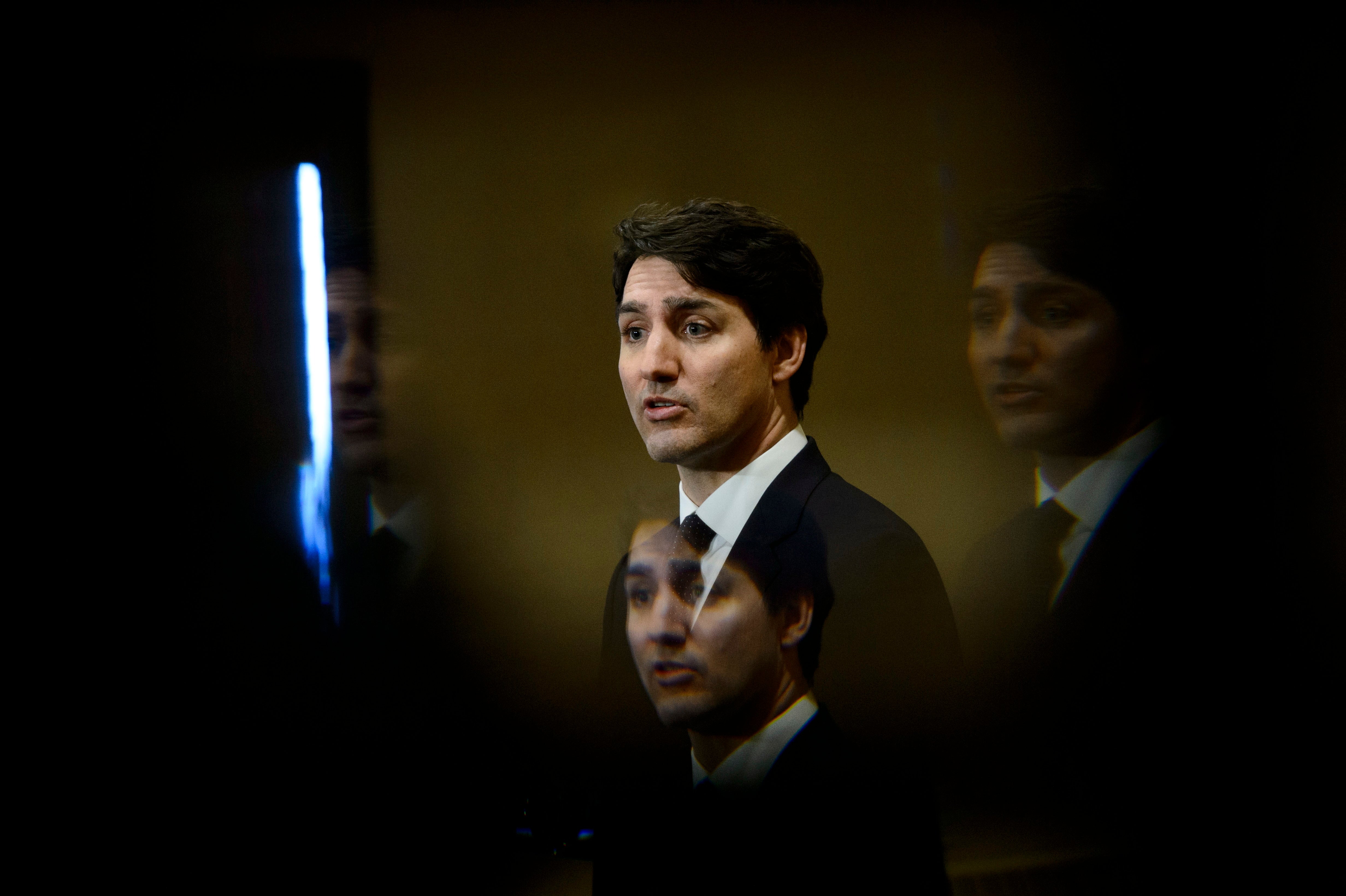 Prime Minister Justin Trudeau is seen through a beveled pane of glass in a door as he takes part in a news conference in Iqaluit, Nunavut, Canada. (The Canadian Press via AP)

TORONTO — Canadian Prime Minister Justin Trudeau acknowledged Friday that he let down his supporters — and all Canadians of color — by appearing years ago in brownface and blackface. Yet the scandal’s fallout may be limited in a country without the harsh and still-divisive racial history of the neighboring United States.

“I hurt people who in many cases consider me an ally,” Trudeau told a news conference. “I let a lot of people down.”

Trudeau, 47, is seeking a second term as prime minister in an Oct. 21 election. His leading opponent, Andrew Scheer of the Conservative Party, has assailed him as “not fit to govern” because of the revelations. But key figures in the prime minister’s Liberal Party have stuck by him, including Foreign Minister Chrystia Freeland, who would be a favorite to replace Trudeau as Liberal leader if he lost the election.

“As I have gotten to know Justin, I know these photos do not represent the person he is now, and I know how much he regrets it,” Defense Minister Harjit Sajjan, a Sikh, said on Twitter.

Nelson Wiseman, a political science professor at the University of Toronto, predicted Trudeau would easily weather the scandal.

“Indeed, I think he is drawing some sympathy,” Wiseman said. “This affair is a media bombshell that is bombing with the public … The international media love this story because it goes against type.”

Wiseman also disputed the assertion that Trudeau is a hypocrite when it comes to race and diversity, noting that his cabinet is the most diverse in Canadian history in terms of gender and ethnic background.

Trudeau’s brownface controversy has drawn some comparisons with developments earlier this year in the U.S., where Virginia Gov. Ralph Northam withstood intense pressure to resign after a racist picture surfaced from his 1984 medical school yearbook.

Quentin Kidd, a political science professor at Virginia’s Christopher Newport University, said the revelations were “a shock and disappointment” to supporters of both Trudeau and Northam, whom they viewed as compassionate politicians.

However, Kidd sees big differences in how the two politicians handled the situation.

“Trudeau has expressed genuine contrition and willingness to accept what he did as racist,” Kidd said. “We haven’t seen that from Ralph Northam.”

“Canada has its issues dealing with racial inequities, but nothing like the American South. There’s no legacy of slavery, of Jim Crow or huge gaps in wealth and poverty,” he said. “Northam has to carry the baggage of that history, whereas Trudeau doesn’t have to carry similar baggage.”

According to recent census figures, Canada’s population is about 73% white, compared with 77% in the U.S. Many of the nonwhites in Canada are from Asia. Only about 3.5 percent of the population is black.

In Trudeau’s multiethnic parliamentary district in Montreal, some residents questioned about the scandal offered a collective shrug.

“It was no big deal, it was a long time ago,” said Zahid Nassar, an immigrant from Pakistan. “When we’re young, we all do stupid things.”

Nassar said he voted for Trudeau in 2015 and will likely do the same next month. If he does not, he said, it will be because he’s worried about safety in his neighborhood.

The brownface controversy surfaced Wednesday when Time magazine published a photo from a yearbook from the West Point Grey Academy, a private school in British Columbia where Trudeau worked as a teacher. It shows the then-29-year-old Trudeau at an “Arabian Nights” party in 2001 wearing a turban and robe with dark makeup on his hands, face and neck. Trudeau said he was dressed as a character from “Aladdin.”

Trudeau said he also once darkened his face for a performance of a Harry Belafonte song during a talent show when he was in high school. In a third incident, a brief video surfaced of Trudeau in blackface. He said it was taken on a costume day while he was working as guide for a river rafting company.

“I have been forthright about the incidents that I remembered,” he said Friday. “I did not realize at the time how much this hurt minority Canadians, racialized Canadians.”

Sunny Khurana, who was photographed with Trudeau for the 2001 yearbook, said no one had a problem with Trudeau’s get-up at the event.

“It was a costume party, Arabian nights, Aladdin,” said Khurana, a Sikh Indian who had two children at the school at the time. “That’s it. People dress up. It was a party. It was never meant to put down anybody.”

In Washington, U.S. President Donald Trump was asked by a reporter about the Trudeau controversy.

“I was hoping I wouldn’t be asked that question,” Trump replied. “I’m surprised. And I was more surprised when I saw the number of times.”

Trudeau later asked if his standing internationally is damaged.

“My focus is Canadians who face discrimination every day,” he replied. “I’m going to work very hard to demonstrate as an individual and as a leader I will continue to stand against intolerance and racism.”

Trudeau said he would call the leader of the opposition New Democrat party, Jagmeet Singh, and apologize for wearing brownface. Singh is also a Sikh.

As for Trudeau’s main election rival, his denunciation of the prime minister was undercut by comments he made shortly before the brownface photo surfaced. Scheer said he would stand by other Conservative candidates who had made racist or anti-gay comments in the past, as long as they apologized and took responsibility for those remarks.

“I accept the fact that people make mistakes in the past and can own up to that and accept that,” Scheer said. “I believe many Canadians, most Canadians, recognize that people can say things in the past, when they’re younger, at a different time in their life, that they would not say today.”